India skipper Mahendra Singh Dhoni conceded that his team was lucky to have scored a 270-plus total on a difficult Eden Gardens track in the fifth and final one-dayer against England. 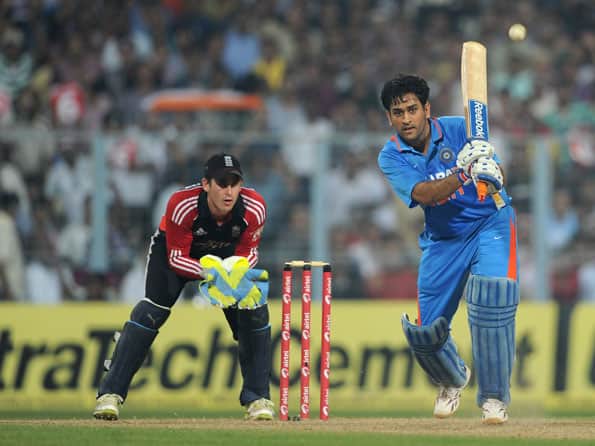 India skipper Mahendra Singh Dhoni conceded that his team was lucky to have scored a 270-plus total on a difficult Eden Gardens track in the fifth and final one-dayer against England.

“It was, to some extent, an ugly looking wicket. You were never really set, and it was difficult to score runs. We were fortunate to score 270 on a wicket like this; 240 to 245 was in our mind,” Dhoni said after guiding his team to a 5-0 whitewash over the visitors.

“We had a bit of a partnership in the middle, and later on with Ravindra Jadeja and Praveen Kumar,” he added.

The skipper led from the front, smashing a 69-ball 75 to prop up India’s innings.

“I want to stay till the end, and whatever’s in my area I try to hit. If it’s not in my area I just try and get a single.

Thanks to Dhoni’s smart captaincy backed up by some fine bowling by Ravindra Jadeja and R Aswhin, England crumbled after a solid start.

“They got off to a very good start, and I was just waiting for it to spin, that’s why I delayed taking the powerplay. We’ve really improved in the fielding department too.”

The skipper, who was also the man of the series, was all praise for his team, especially Jadeja.

“Jadeja and Praveen (Kumar) gave us the extra 20 runs.

Man of the Match Ravindra Jadeja, who finished with impressive figures of four for 33 to go with his 21-ball 21, said he was just trying to bowl a good line a and length.

“There was turn in the wicket, so I was just trying to bowl line and length, stump to stump. There was a little bit of dew on the ground, but we kept drying the ball after every delivery. I’ve been working hard in the nets, on batting and bowling.”

Rival skipper Alastair Cook was disappointed with way his team lost the plot after a great start.

“We were in with a shout there, and we were blown away at the end. Very disappointing. We know that you can lose wickets in cluster, we seem to have lost 10 there in a cluster. Credit to the way they bowled, and we played a couple of poor shots,” Cook said.

The left-hander felt that Steven Finn’s bowling was the biggest positive for his team from the series.

“There have been a few positives out of this series, Steven Finn’s bowling for example.” (PTI)

India move up to third spot in ICC ODI rankings