The second ODI would be of great significance, to be played at Mohali on December 13 as It is being said that Dhoni is all set to retire.

Before you panic, let us tell you that it is not MS Dhoni we are talking about. We are discussing Dhoni, the sniffer dog used by the Mohali district police for the past 10 years for security purposes. India are currently battling Sri Lanka in the third and final Test at the Feroz Shah Kotla Stadium in Delhi. Following this, the teams will engage themselves in a three-match ODI series, starting Sunday at Dharamsala. The second ODI will be played at the Punjab Cricket Association (PCA) Stadium in Mohali on December 13. It is being said that Dhoni the dog is all set to retire following the match. FULL CRICKET SCORECARD: India vs Sri Lanka 2017-18, 3rd Test at Delhi

Actually, Dhoni will not be only representative of the canine clan do to retire that day. He will be accompanied by two others, John and Preeti. On December 13, the Mohali district police will be holding a formal farewell for the dogs. Following the farewell and retirement, Dhoni, a white Labrador, will be up for adoption. He will go under the hammer in an auction ceremony, starting with a base price of INR 800. Amrik Singh, his in-charge, has said that Dhoni has helped the Mohali police in solving numerous cases, as reported by The Indian Express and Chandigarh Newsline. When MS Dhoni made his Test debut

Dhoni used to assist us in checking at PCA stadium during the international matches. During the world cup semi-final in 2011 between India and Pakistan, when the Prime Ministers of both the countries came to the city, Dhoni was working with us.

He likes to sleep six to seven hours a day. He sleeps in the daytime. He is a specialist in sniffing explosives. He is the quickest of the dogs we have when it comes to do any search operations. We are going to miss him. He has been a great asset for us. 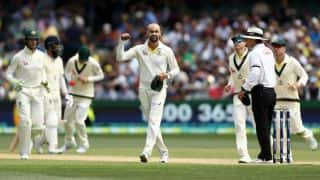 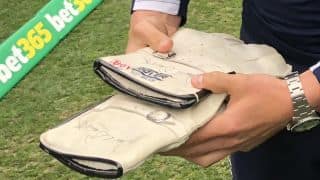