Chennai Super Kings captain Mahendra Singh Dhoni is happy that they have been able to turn Chepauk into a 'fortress' having won six consecutive matches here but at the same time doesn't want his boys to be complacent. 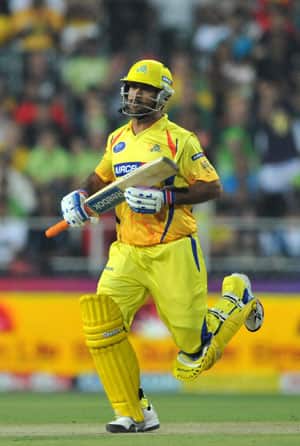 Chennai Super Kings captain Mahendra Singh Dhoni is happy that they have been able to turn Chepauk into a ‘fortress’ having won six consecutive matches here but at the same time doesn’t want his boys to be complacent.

“It’s good thing that we have been winning at home. But that doesn’t mean that we can’t lose at home. We have to be aware that a team can have a good day and beat us. We have to accept that with an open mind also,” the skipper who was also the Man of the Match said at the post match presentation ceremony.

About CSK consistently being able to step up the ante, Dhoni credited the top-order batsmen for laying the foundation. “We have always looked at scoring seven or seven and half runs an over in the initial phase. That gives us an ideal platform to accelerate and score around 65-70 runs in the last six or seven overs. So credit should got to our top-order batsmen for providing us that platform.”

About his own batting, Dhoni said, “I came at No. 4 and started attacking from the start as I knew that I had batsmen like Albie Morkel, Dwayne Bravo and Wriddhiman Saha to follow.”

Rival captain James Hopes felt that 18-run margin was an “accurate description” of where they were in the game. “17-18 runs (margin) are a pretty accurate description of where we were in the game. After 15-16 overs, we were still in front, but Dhoni was devastating. The teams at the top of the table all have some power hitters coming in which is making the difference.”

With another couple of matches left, Hopes feels that they can “mix and match” combinations in order to spoil the party for other teams.

Offie Ravichandran Ashwin who was the best bowler on view taking two for 19, said, “It matters how it comes out of the hand. In this format, the batsman is going to come hard at you. I don’t think about that as I just watch how the ball is coming out of my hand.”