Suresh Raina in his partnership with Virat Kohli added only 41 runs to the overall stand of 134 runs.

In an innings which had the likes of Shikhar Dhawan, Rohit Sharma and Virat Kohli striking with brute force it was Suresh Raina who came into focus. India with clash with Australia in the first Twenty20 (T20) International  match of the three-match series at Adelaide. Raina who returns to international cricket after a gap to two and a half months managed to stir up a debate regarding his slow and uneasy innings as compared to his overall T20 standards. Raina in his innings of 41 took about 34 balls to achieve that mark, including three boundaries and a single six. LIVE CRICKET SCORECARD: India vs Australia 2015-16, 1st T20I at Adelaide

Raina in his partnership with Kohli only added 41 runs, as the pair only accumulated 134 crucial runs for third wicket. Raina who came in after the fall of Dhawan, was unable to play the in form Shane Watson managing only 5 runs from the 8 balls he faced. It was James Faulker who he fancied his hand at picking him for 16 runs in 9 balls he faced, which included his wicket as well.

Suresh Raina had also completed 1,000 runs in the Twenty20 International (T20I) format, in his innings of 41 runs. Raina was just 17 runs short of a career 1,000 runs, only Indian player to cross the four figure mark was Kohli.

India have scored  a fantastic score of 188-3 in their 20 overs against Australia in the first T20I of the three-match series at Adelaide on back of a handsomely composed, unbeaten 90 by Virat Kohli. 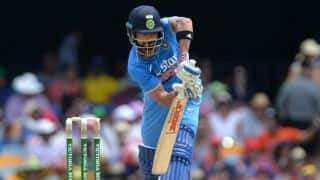