Difficult to get result in the first Test, says Broad

Difficult to get result in the first Test, says Broad

England have the distinct advantage over India with a massive first innings lead in hand but their star pacer Stuart Broad is still not quite sure if the hosts can go on to win the first cricket Test. 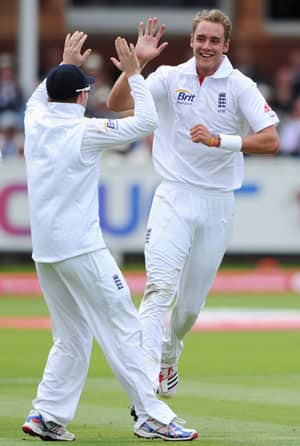 England have the distinct advantage over India with a massive first innings lead in hand but their star pacer Stuart Broad is still not quite sure if the hosts can go on to win the first cricket Test.

“It’s difficult to get result. The stats will show so. It does get very slow and low. The key will be swing. There’s saying that at Lord’s you look up (at the sky) and not down (at the pitch),” said Broad whose four wickets on Saturday were key to England bowling out India for 286 runs for a 188-run lead.

“When the sun is out, batsmen are jumping with joy; when it’s cloudy it perks up the bowlers a little. We hope it’s sunshine tomorrow and heavy clouds on Monday,” he added.

Among Broad’s wickets, there was the prized one of Sachin Tendulkar for 34.

“You feel when you get any danger man outmen like (Ricky) Ponting and (Jacques) Kallis, you know they are the strong leaders of a batting unit.

Did he spot any weakness in him?

“Well if someone has played 178 Tests, there is not much weakness. He was fantastic in his 30-odd runs but we were delighted to see his back.”

One batsman whose back England didn’t see early was Rahul Dravid, the centurion with a knock of 103 unbeaten runs.

His judgment on his off-stump was the particular highlight.

But we bowled nicely to him and kept the pressure. There were no easy boundaries. He had to work hard for his runs.”

Broad is usually asked to bowl bouncers a lot but Saturday he most of the times bowled fuller lengths.

“I bowled fuller, with three slips and gully, and that was good. You have different roles within a side. You pitch the ball up and look for movement but when the moment comes for a bowler to rought the batsmen up, it’s straight to me for my bouncer is decent.”

Broad wasn’t given the new ball as it was shared by James Anderson and Chris Tremlett but the Nottinghamshire bowler wasn’t complaining.

“I have got past successes as a first change bowler.

Chris (Tremlett) deserves the new ball. He was good in Australia and man of series against Sri Lanka. He deserves the role,” he said.

Broad wasn’t utterly disappointed that two catches were dropped off his bowling in one over.

“(Andrew) Strauss was already celebrating it when it went down. You search for that perfect performance but it doesn’t always happen.”

Broad revealed that his side wouldn’t have enforced the follow on even if India had failed to make 275 runs, the follow-on target.

“We wouldn’t have enforced the follow-on. It’s good to do when you have bowled only 40-50 overs. Then it becomes hard work for bowlers. We can now take rest and come out firing (when India bats again).”

Tendulkar struggled with fever while batting