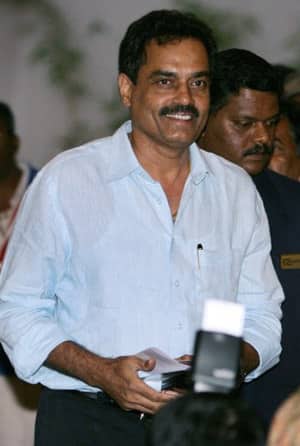 On the occassion of the award ceremony, Dilip Vengsarkar recalled Eden Gardens as one of his favorite venue AFP

West Bengal Sports Minister Madan Mitra handed over the awards to Vengsarkar and Wilson before an august assembly of sportspersons, administrators and others connected with games and sports.

Speaking on the occasion, Vengsarkar said Kolkata always had a special place in his heart and termed the Eden Gardens his favourite ground for its supportive crowd.

He recalled that he had scored his maiden Test century (157 not out) in 1978-79 against the West Indies at the historic Eden. Vengsarkar and then captain Sunil Gavaskar stitched together a 344-run partnership during the Indian second innings of the match.

“Till that moment, I was doing well but only to get out in 80s or 90s. Before the start of Kolkata Test someone told me that I should not misfieLd or drop a catch here. Otherwise, 80-90,000 people will be after me. But as things turned out, myself and Sunil Gavaskar shared a 344-run partnership here. I really enjoyed playing here.”

In the same breath, Vengsarkar said he was lucky to hail from Mumbai, “the headquarters of cricket.”

While praising the Board of Control for Cricket in India for doing a “great job” in creating infrastructure, Vengsarkar singled out former BCCI chief Jagmohan Dalmiya for special mention.

“He was a fantastic administrator. Because of him we are now seeing the great days of cricket. Really hats off to him.”

He described Kolkata boy Sourav Ganguly as one of the finest captain in Indian cricket.

“He was my room partner on my last trip to Australia. He is a great motivator and promotes youngsters. He still has the love for game. He is still committed and playing with a lot of passion.”

Extending his best wishes to Pune Warriors skipper Ganguly for the Indian premier League, Vengsarkar hopes he will do well in the May 5 game against Kolkata Knight Riders. “I am sure the people here will be rooting for him.”

Going down memory lane, Wilson said she got her first medal in Kolkata “when I was studying in class nine during the school nationals here”.

“It feels great to be here. I feel honoured.”

Mitra announced a Rs.5 lakh award for the CSJC and said from Friday sports journalists and photographers would be allowed to travel free in state government buses. (IANS)

After Sachin, CPI calls for Ganguly's nomination to Rajya Sabha