Vengsarkar is hopeful India would bring back the Twenty20 World Cup it won in its inaugural year in 2007.

Though disappointed at the India‘s pathetic performance over the last few months, former skipper Dilip Vengsarkar is optimistic about the Mahendra Singh Dhoni-led side’s chances in the upcoming ICC World T20 championship in Bangladesh.

The Indian team has lost successive Test and One Day International (ODI) rubbers to host nations South Africa and New Zealand before coming a cropper in the ongoing Asia Cup 2014 in Bangladesh where it failed to make the final.

However, Vengsarkar is hopeful the team would bring back the Twenty20 World Cup it won in its inaugural year in 2007.

“Of late, India is not doing too well. But I still have a strong belief that India would do extremely well in Dhaka [n T20] because the wickets over there are similar to Indian wickets.

“But the [bowling] attack looks like a weak link. I think we have the same attack in Tests, ODIs and T20. The same Bhuvneshwar Kumar, the same [Mohammad] Shami, the same guys.

We don’t have options and that is the crux of the matter, unfortunately,” Vengsarkar said while unveiling the replica of the coveted T20 Trophy at the Bombay Gymkhana on Friday.

The former chief selector felt spinners hold the key in the sub-continent conditions and was also happy with the return of Dhoni, who skipped the Asia Cup due to injury, in beefing up the batting department.

“In Asia Cup, the performance wasn’t that great but I still hope we will do well in this forthcoming World Cup. It is a 20-over tournament and we have won it before and we hope we will do the same thing again.”

“Dhoni will definitely make a lot of difference. He is an excellent captain and has been around for almost six to seven years. He is an experienced campaigner and he has won so many matches with his batting as well,” Vengsarkar said.

“He is a crucial player at number six and he is a good keeper also. Dhoni is a very important member of the team and I am sure he will do well. Of late, he has not done well abroad but I am sure, the team under him has still plenty of hope,” he said.

“I am sure he [Dhoni] will not fumble like what had happened in the last few matches,” said Vengsarkar, referring to the spate of reprieves provided to opposition batsmen by stand-in stumper Dinesh Karthik in the Asia Cup.

While emphasising the weakness of the bowling attack, spin in particular, he felt India could, on the other hand, depend on the strength of its batting.

“The bowling department looks like a weak link for us but anything can happen in 20 overs. They have to bowl only 4 overs and how they bowl that is very important,” he said.

“Spinning department is very important because we are playing in an Asian country, where spinners will be very important. And those in the team would have to deliver.

Unfortunately we don’t have many bowling options. The same set play in all formats. They look tired and jaded.

The former middle-order mainstay expressed dismay over chief coach Duncan Fletcher, under whom India have lost four overseas Test rubbers on the trot in England, Australia, South Africa and New Zealand, returning home to Zimbabwe after every international assignment instead of watching domestic games.

“It’s a matter of serious concern because India will be playing five [Test] matches in England [this season]. It’s disappointing we have not won anything abroad [in recent times]. Also, he needs to watch domestic cricket. If he watches only international cricket it’s not good enough. After an international series he goes back home.

“I don’t know what is in his contract [with BCCI]. The thing is he has to watch local games also. Ishwar Pandey has not been picked [in the India playing 11 so far] because he has not been watched. Unless he [Fletcher] watches local matches he will not know who is good enough to play for India,” Vengsarkar maintained.

Vengsarkar recalled how the Indian cricket officials were not inclined towards the T20 format when it was conceptualised.

“In my career, I never played T20 games but I was very much part of the first International Cricket Council (ICC) trophy, which the Indian team won in South Africa. I was the selector and I was in England at that time.

“Board of Control for Cricket in India (BCCI) was not very keen on this format then and we didn’t have any key records or scores for the tournament and the BCCI was the last board to accept this format of the tournament,” he remembered.

“I was with the Indian team that time and we were playing against England and we had to pick the side. The other four selectors were there in India. It took us almost two hours and, apart from the format, we were discussing who would do well in this format,” he said.

“Dhoni was made the captain that time and all young players were there. We all thought the youngsters would bring in the energy and they would do well in South Africa,” Vengsarkar said.

“Almost 4-5 senior players dropped out of the tournament and that allowed us to get all the youngsters with whom we were happy in ODI matches. And then, India won the World Cup,” he said.

Among the seniors who opted out of the inaugural edition in 2007 were Sachin Tendulkar, Rahul Dravid and Sourav Ganguly.

India, under Dhoni, went on to create history by defeating Pakistan in a nail-biting final in Johannesburg. 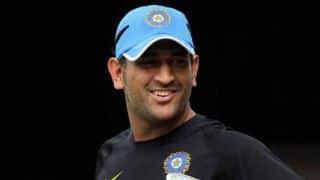