No sooner had Sri Lanka captain Tillakaratne Dilshan been named man-of-the-match in the drawn second Test against England at Lord's here on Tuesday he was doubting his prospects of playing in the series climax. 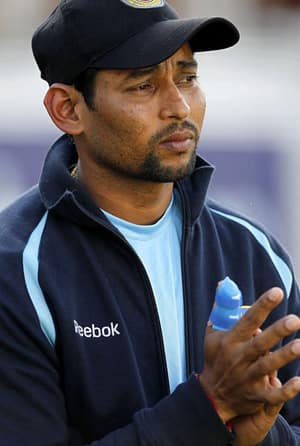 No sooner had Sri Lanka captain Tillakaratne Dilshan been named man-of-the-match in the drawn second Test against England at Lord’s here on Tuesday he was doubting his prospects of playing in the series climax.

Opening batsman Dilshan made 193 in Sri Lanka’s first innings but was twice hit on the right thumb by fast bowler Chris Tremlett, causing a hairline fracture which has left a huge question mark over his availability for the third and final Test at the Rose Bowl starting on June 16.

“It is a small fracture,” said Dilshan, off the field for the final two days at Lord’s, where Sri Lanka restored some pride after going 1-0 down during an innings and 14-run first Test defeat in Cardiff.

“I will have to wait for 10-15 days and I shall see how it goes before the next Test match,” Dilshan also told Sky Sports.

“I feel I will miss the last Test but I’ll see how it goes in the next couple of days,” said Dilshan who’ll be replaced as captain by former skipper Kumar Sangakkara, who deputised at Lord’s, if he is unfit for the Rose Bowl.

Dilshan, whose innings surpassed Sidath Wettimuny’s 190 in 1984 as the best by a Sri Lankan in a Test at Lord’s, was pleased by his side’s increased resilience following their Cardiff collapse.

“Overall I am happy. It was all round a very good performance after the Cardiff match.”

England captain Andrew Strauss set Sri Lanka a target of 343 to win in 58 overs after declaring the hosts second innings on 335 for seven.

But, unlike Cardiff, Sri Lanka had few problems in closing out a draw.

“We thought we had a chance if we took early wickets,” said Strauss.

“We knew the wicket on the fifth day at Lord’s would be flat so we needed something special to happen,” he added.

Cook’s innings continued a remarkable sequence with his first innings 96 in this match the only time in the Essex left-hander’s last four Test knocks he’s failed to reach three figures.

Now the 26-year-old is just four hundreds away from equalling the England record of 22 Test centuries shared by Walter Hammond, Colin Cowdrey and Geoffrey Boycott.

“My form’s nice, but that form’s not going to last forever so you’ve go to make the most of it while it does,” said Cook.

However, Cook left himself open to some criticism by taking 137 balls for his second fifty when England were in search of quick runs.

“When we went out there today we were only 140 runs ahead, so if you lose a couple of wickets it’s not a great position,” Cook explained. “It was about getting through that first hour and then building a partnership with Kev.

“We actually scored at four an over in that session — obviously I didn’t do much of that scoring but you have to give credit to how Sri Lanka bowled.”

Why is Jayawardene not often mentioned as one of the great modern batsmen?