Upul Tharanga notched up a fine hundred as he together with Tillakaratne Dilshan raised a massive double century stand that knocked the stuffing out of the Zimbabweans in their World Cup Group A match at the Pallekele International Cricket Stadium here on Thursday. 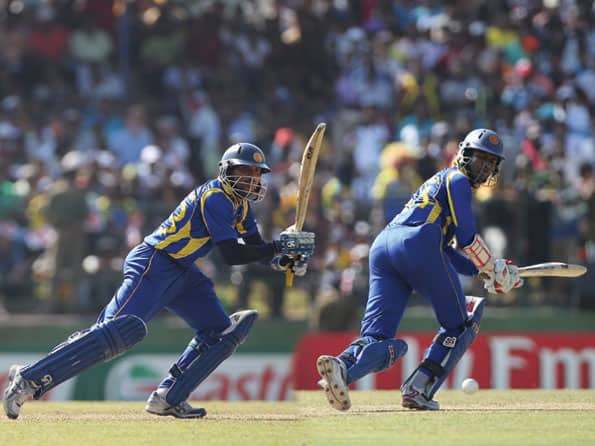 Upul Tharanga notched up a fine hundred as he together with Tillakaratne Dilshan raised a massive double century stand that knocked the stuffing out of the Zimbabweans in their World Cup Group A match at the Pallekele International Cricket Stadium here on Thursday.

Tharanga reached his hundred when he drove Ray Price through the cover region.

Earlier, Dilshan biffed Zimbabwean captain Elton Chigumbura to the cover boundary to arrive at his hundred in style.

Zimbabwean captain Elton Chigumbura decided to bowl first after winning the toss but that s the only success Zimbabwe had so far.

Chigumbura also surprised many by opting for an all-seam opening attack after having achieved a fair amount of success while employing a seam-spin opening bowling combination in the three previous matches a move that backfired.

Upul Tharanga drilled Zimbabwe opening bowler Chris Mpofu to the point boundary after surviving a loud lbw shout off the first ball of the match.

Dilshan welcomed Panyangara into the attack with a drive down the ground to collect his first boundary. He followed that by pulling Panyangara over the mid-wicket boundary for a six when the bowler had pitched it marginally short.

Panyangara was clearly rattled by the onslaught as he struggled to get his line right as Dilshan first crunched him through the off-side before cutting him past point to collect eighteen off his first over.

Zimbabwe had to find a way to stem the flow of runs and Chigumbura brought Zimbabwe s best bowler Ray Price into the attack.

It s fair to assume that the Sri Lankan openers were in the groove by the time Price came on to bowl. Dilshan showed him scant respect, twice giving the charge and banging him through short extra cover and mid-off to keep the runs flowing.

Tharanga was happy to play the second fiddle to Dilshan but he also made merry, picking Mpofu for three boundaries in the tenth over and kept the milking the Zimbabwean bowlers for ones and twos.

The match holds a lot of emotional significance for Sri Lanka – it would be the last international match in Pallekele for spin wizard Muttiah Muralitharan.