Dimuth Karunaratne, Dinesh Chandimal fought hard to bring Sri Lanka back in game on Day One of second Test at Nagpur.

Dimuth Karunaratne, Dinesh Chandimal fought hard to bring Sri Lanka back in game on Day One of second Test against India at Nagpur. Before tea, they put up 151 for 4. From 47 for 2 before lunch, Sri Lanka recovered well to add 104 runs more in the second session of the day, losing two more wickets. At the crease now are Chandimal (47*) along with Niroshan Dickwella (18*).

Sri Lanka lost Mathews right after lunch. A full length delivery came in to hit Mathews on the front pad. It primarily seemed like Mathews had edged this one to Ajinkya Rahane at slip. But Mathews took the review and it showed that the ball would have gone on to hit the leg stump.

Karunaratne and Chandimal held fort from here on. The partnership added 62 runs and stabilised Sri Lanka’s innings after successive fall of wickets. Karunaratne scored a half-century, but departed soon after.

Ishant Sharma struck again, as his delivery hit Karunaratne onto the front pad. Sri Lanka reviewed against the umpire’s decision but the ball would have gone on to hit the stumps and Karunaratne had to depart.

Chandimal stuck around and Dickwella joined him at the crease. The duo took Sri Lanka past 150. Sri Lanka scored 104 runs in the session losing 2 wickets. They did better than their previous session but the important partnership has been broken. 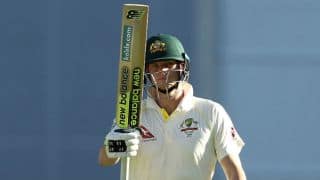 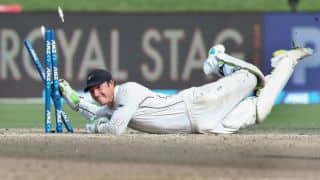