Sri Lanka will hope that Dimuth Karunaratne stays till stumps.

Sri Lanka opener Dimuth Karunaratne scores his second Test century for Sri Lanka in the third Test, Day One against Sri Lanka at Pallekele. He came out to open the innings with Kaushal Silva, but he went early in the day. He has managed to keep his composure despite of losing wickets in a hurry at the other end at one stage. Live Blog: Sri Lanka vs Pakistan, 3rd Test Day 1 at Pallekele

Karunaratne, however put on 91 runs with Upul Tharanga for the third wicket. After Tharanga was dismissed for 42, Lahiru Thirimanne and skipper Angelo Mathews too fell for Yasir Shah cheaply. Karunaratne battled well and has scored a well deserved century. He has put on over 50 runs for the fifth wicket with Jehan Mubarak, who is making a comeback into the Sri Lankan team after a gap of seven years. Live scorecard: Sri Lanka vs Pakistan, 3rd Test Day 1 at Pallekele

Earlier Pakistan had won the toss and elected to bowl first. Kumar Sangakkara had opted out of this match, but will be available for the next home series against India. Both teams have made four changes to their playing XI. 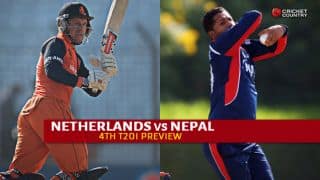 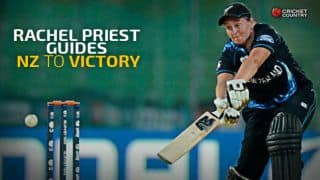