Sri Lanka are 0-2 down against England going into the third and final Test at Lord's.

Sri Lanka opener Dimuth Karunaratne has said that he is unhappy with the kind of preparations he has had ahead of the Test series against England. Karunaratne in his four warm-up innings against Essex and Leicestershire has had scores of 8, 16 not out, 0 and 100, but believes that the practice was not good enough going into a Test series. Karunaratne in the two Tests against England has managed to score just 42 runs in his four innings. Sri Lanka are already 0-2 down in the three-match series and will look to salvage some pride by winning the third Test at Lord’s, beginning on Thursday. Full Cricket Scorecard: England vs Sri Lanka 2016, 3rd Test at Lord’s

“I don’t think the century in that warm-up game was very satisfying,” Karunaratne told the Island. “I don’t think that kind of preparation will do any good ahead of a tough Test series. The oppositions we played were basically second-string teams. In our second warm-up game, there were just two fast bowlers and the rest were spinners. I wasn’t too pleased after getting the hundred.”

Karunaratne has been one of the heaviest scorers in the domestic circuit for Sri Lanka. He was excellent in the four-Test series against New Zealand, where he had an average of over 42 in four Tests. He went on to say that Sri Lanka should have played a team from Division One from the English County, but played against a couple of teams from Division Two instead. READ: Ford: SL have no depth in fast bowling

“During the practice game, of the two fast bowlers, the quickest guy bowled just four overs,” Karunaratne said. “Some of the Division Two bowlers didn’t ask many questions. When we play that kind of opposition and all of a sudden play James Anderson and Stuart Broad in the Test match, the gap is huge. We tend to make more mistakes and get out cheaply. When England come to Sri Lanka, they play our A team as warm-up.” READ: Eranga reported for suspect bowling action

Karunaratne also said that words of advice from Mahela Jayawardene and Kumar Sangakkara ahead of the Lord’s Test have helped him. “Mahela Jayawardene had a chat with me and he gave me some options. Then Kumar Sangakkara called me and stressed the need to remain positive. His tips are useful as he has played here a lot. Sanath Jayasuriya too had a chat with me. Currently I take guard on the middle stump. He suggested that I should maybe move between middle and off stump as that allows me to stop playing outside the body. He had done the same thing during his playing days. These are very useful tips.” 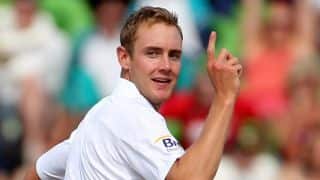