Dinesh Chandimal reaches his 6th Test hundred at Chester-le-street of Durham. He inspires Sri Lankan batsmen as he played a fighting knock under pressure despite suffering from an injury early on in the Test. He came to the crease when Sri Lanka were struggling on 182 for four. Kaushal Silva has got out recently and Sri Lanka were still trailing by 215 runs. He did good to play himself in and share a partnership with his skipper Angelo Mathews who scored 80. After than he shared a 92 run stand with Milinda Siriwardana taking on a tired England bowling attack towards the end of third day’s play. He faced the new ball with precision hitting it into gaps for boundaries, running the twos hard with Rangana Herath and taking Sri Lanka out of danger of defeat by an innings and a few runs. LIVE CRICKET SCORECARD: England vs Sri Lanka, 2nd Test at Chester-le-street

Sri Lanka had a horrible first innings batting collapse as they bundled out for 101 within 44 overs. England enforced a follow on. The visitors did well fighting back with valuable contributions from Silva and Mathews. They had to do something extraordinary to take their team out of the danger of losing by an innings and runs for second time in the series. Chandimal was dropped on Day 4 bu Bairstow as he edged Anderson’s swinging delivery outside the off stump

James Anderson is on fire as he has picked up three wickets in this innings. He has taken six wickets in this match so far and is just one wicket away from 450th wicket. He recently surpassed Kapil Dev’s record of 434 wickets to become 6th bowler on the list of most wickets in Tests. 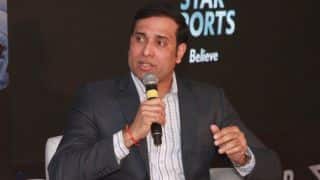 VVS Laxman: SRH's team bonding has been exceptional in IPL 2016