Dinesh Chandimal, Angelo Mathews centuries pushed Sri Lanka's score to a competitive 356 for 9 before the stumps of Day Three of third Test.

Dinesh Chandimal, Angelo Mathews centuries pushed Sri Lanka‘s score to a competitive 356 for 9 before the stumps of Day Three of third Test. Though Mathews departed for 111, Chandimal remained unbeaten at 147 at stumps as Sri Lanka trailed India by 180 runs. At the crease now is Lakshan Sandakan, who is yet to score a run, along with Chandimal.

Sri Lanka had a relatively better session as they did not lose a wicket before lunch. After losing two early wickets on Day Two, Mathews and Chandimal built up Sri Lanka’s biggest partnership in the series that added 181 runs. They added 61 runs in the session. Post lunch, Mathews got to the eighth Test ton of his career. this was his first century in two years, first in 19 Tests.

India kept the field tight, barring the duo from scoring singles. This frustrated the batsmen, who eventually gave in to the ploy looking for lofted shots. Mathews kept living dangerously as he was put down twice in his nervous nineties. Eventually, he gave in to one Ravichandran Ashwin delivery that skidded and did not turn, edging the ball to wicketkeeper Wriddhiman Saha. Sri Lanka lost Mathews just before tea. They scored 78 runs in the session.

India came back in the game in the final session as they started taking regular wickets. From 270 for 4, they were reduced to 356 for 9 in a single session. Ashwin bagged two more wickets in the final session to emerge as the best bowler with 3 wickets. Him, along with Mohammed Shami, Ravindra Jadeja and Ishant Sharma bowled well and restricted the tail-enders. Ashwin equalled Nathan Lyon’s numbers to emerge as the highest wicket taker of 2017 in Tests (54).

Chandimal clung on and defended well to keep Sri Lanka’s innings going. He also hit a six towards the end of the day. He scored the 10th century of his career, second against India and is 3 runs away from the fourth 150 of Test career. Sri Lanka scored 86 runs in the final session on Monday. 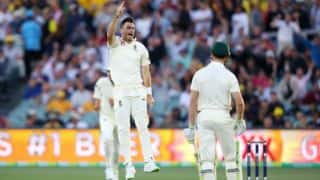 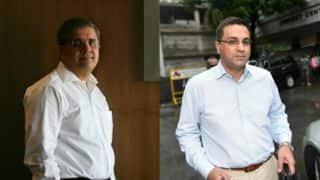