Given his recent form in ODIs, Dinesh Chandimal has been dropped for the ODIs against India. Chandimal s form dipped n in 2017 following his finger injury. He has scored mere 255 runs off 15 innings at 18.21. He was Sri Lanka’s highest run-scorer in ODIs last year with a tally of 656 runs at 59.63, including six fifties and two centuries. In the ODI series against Pakistan, Chandimal scored a mere 41 runs in 5 innings.

Thisara Perera will don the captaincy hat in ODIs as well as T20I. Asela Gunaratne, Kusal Perera and Danushka Gunathilaka will return to the squad, as mentioned on Sri Lanka s Sunday Times. Gunaratne has been out of the international circuit since he fractured his thumb in the first Test against India at Galle.

Meanwhile, Perera has not represented Sri Lanka since the 2017 Champions Trophy due to hamstring injury. Gunathilaka was suspended for six international matches by Cricket Sri Lanka (CSL) after pleading guilty to misconduct and breach of contract during the home series against India.

The first ODI will be held at Dharamsala on December 10. 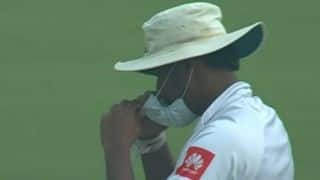