Sri Lanka have dropped skipper Dinesh Chandimal for their tour of South Africa and have named opener Dimuth Karunaratne as the stand-in skipper.

Sri Lanka have dropped skipper Dinesh Chandimal for their tour of South Africa and have named opener Dimuth Karunaratne as the stand-in skipper.

The National Selectors have decided to appoint Dimuth Karunaratne as the Stand-In Captain for the tour. They have also released Dinesh Chandimal from his duties as Captain and Player of the National test team to play domestic cricket to regain his form and be ready for future international tours, the Sri Lankan Cricket Board said in a statement.

Under Chandimal, Sri Lanka lost the opening day-night Test in Brisbane by an innings and 40 runs inside three days and followed it up with a 366-run thrashing in the Canberra Test.

It extended a dire run of results for troubled Sri Lanka who have been hit by injuries and off-field scandals.

Besides the defeats in Australia, Sri Lanka also recently lost a home Test series to England 3-0 and suffered a 1-0 loss against New Zealand in an away series.

The first Test in South Africa starts on February 13, with the squad flying straight there from Australia this week in a gruelling overseas schedule.

“We are a young team and we are always learning how to play, especially in these tough conditions. We will bounce back in South Africa,” Chandimal said in Australia. 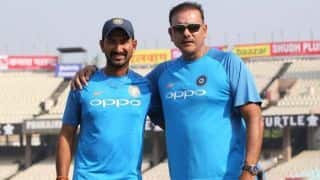