Dinesh Chandimal credited the Indian bowlers for their brilliant performance on day one.

Galle: Sri Lankan keeper-batsman Dinesh Chandimal credited the Indian bowlers for their brilliant performance on day one of the first cricket Test here today, as the hosts were bowled out for just 183 runs in their first innings. Off-spinner Ravichandran Ashwin took 6-46 and then Shikhar Dhawan and Virat Kohli added an unbeaten 100-run partnership as the visitors finished just 55 runs adrift at stumps. “All credit goes to their bowlers and they bowled really well,” said Chandimal after the day’s play. “The last 2-3 days the pitch was under covers, and suddenly they took it off this morning. With the dew on the wicket there was a bit of turn and the Indian spinners exploited it nicely.” VIDEO: Shikhar Dhawan fails to connect punch with Virat Kohli

“The wicket got dry in the afternoon and there was not much turn in the last session. And we didn’t click as a batting unit. It can happen. We are looking forward to the next innings,” he added. Ashwin took his best figures outside India close on the heels of 5-87 against Bangladesh in Fatullah on the previous tour. Amit Mishra also picked two wickets while Ishant Sharma and Varun Aaron had one apiece. Ravichandran Ashwin creates history during Day 1, India vs Sri Lanka 1st Test

“He bowled really well and the Indian spinners didn’t give any pace to us. They bowled really slowly. As batsmen, it then becomes really difficult to get runs with the straight shots. We had to play the sweeps and the reverse sweeps. So all credit to them that they bowled really well,” he said. Chandimal put on 79 runs with his skipper Angelo Mathews as both batsmen struck half-centuries that enabled Lanka to cross the 100-run mark and get a fighting total on the board. But their hopes were undone as both Dhawan and Kohli were well set at stumps. India firmly in control against Sri Lanka at stumps on Day 1 of 1st Test at Galle

“There was moisture in the pitch and it turned more than we expected on the first day. When I was at the crease we talked about how we could get out of this bad situation. If a good ball came, we would end up with no runs and we would have given our wicket as well. We decided that if a loose ball comes, we would go after it. We tried to recreate a one-day match feeling. Unfortunately Angelo got out, otherwise, if we could have put on another 100 runs, it would have been a good total,” said the keeper-batsman. Ravichandran Ashwin’s 6 for 46 the best Test figures for an Indian in Sri Lanka

“The pitch got better for batting after lunch, and then it got better again after tea. It was just a normal turn towards the end of the day. I think the next two days will be good for batting. We’ll try to restrict India as much as we can and plan how to bat in the second innings,” Chandimal signed off. Ravichandran Ashwin continues renaissance with six-wicket haul against Sri Lanka in 1st Test at Galle Matthew Wade: Playing tri-series in Chennai has enhanced my skills 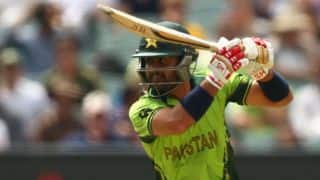