The duo came together at 95 for 5 before putting on a century partnership.

Dinesh Chandimal and Lahiru Thirimanne batted wonderfully after India reduced Sri Lanka to 95 for 5 on Day Three of the first Test at Galle on Friday. Chandimal came out swinging after lunch, hitting six fours and two sixes in his 48-ball half-century. Thirimanne at the other end also batted positively. The duo came together at 95 for 5 before putting on a century partnership. Chandimal was the aggressor, but even Thirimanne looked to score runs rather than play for a draw. The duo ensured that India’s lead diminished entirely, finally getting into the green side of the ledger. Live Cricket Scorecard: India vs Sri Lanka 2015, 1st Test at Galle, Day 3

Earlier, Varun Aaron took a wicket off the first ball of the day before Kumar Sangakkara and Angelo Mathews kept India at bay with an 87-run partnership. Ravichandran Ashwin and Amit Mishra then took the wickets of both batsmen in seven balls to reduce Sri Lanka to 108 for 5 at lunch. For as long as Sangakkara and Mathews were in the middle, Sri Lanka had hope. But Ashwin set him up beautifully; having beaten Sangakkara’s outside edge off one ball, he kept things tight before tossing one up just a bit wide of off stump. Sangakkara went at it with hard hands and the resultant edge was taken well by Ajinkya Rahane at slip. Mishra then had Mathews out offering a catch to silly point as KL Rahul took a good reaction catch.Live Cricket Blog: India vs Sri Lanka 2015, 1st Test at Galle, Day 3 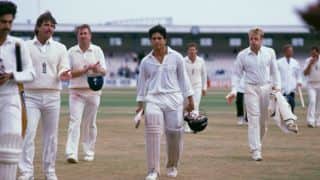 Shoaib Akhtar: 14 interesting facts about the maverick who terrorised batsmen, teammates and administrators