Sri Lanka came from behind to snatch a draw in the third and final Test against India at the Feroz Shah Kotla Stadium in Delhi on Wednesday, as India clinched the series 1-0. However, despite the draw and the series loss, Dinesh Chandimal was all praise for his side as the credited the players for their fighting performance. Chandimal also said that it was overall a good series for Sri Lanka despite the loss, barring the second Test, which they lost by an innings and 239 runs. Chandimal praised the team for performing as a unit despite the the absence of injured veteran Rangana Herath, who has been a match-winner for the side for the past few games. FULL CRICKET SCORECARD: India vs Sri Lanka 2017-18, 3rd Test at Delhi

“It was a really good series, apart from the second Test. We learnt a lot. Credit to the players and management for working hard. The guys executed their plans in the middle. Once Rangana was injured, everyone looked up to Angelo Matthews and he delivered. Dhananjaya and Roshen batted really well in tough conditions against some great bowlers India have got. Dickwella played a totally different brand of cricket. Happy with the way we played today,” said Chandimal during the post-match presentation ceremony.

“Before I got here, I changed my technique. I’d worked hard at the nets with the batting coach. It’s paid off for me.” India vs Sri Lanka, 3rd Test: Marks out of 10 for Dinesh Chandimal and co. 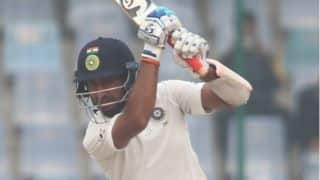