Sri Lanka will be extremely happy with their effort after being 70 for 4 at lunch on Day One. Niroshan Dickwella earlier today had said they will be looking at 275 runs on the board. Now that they have 338, the hosts will be upbeat about their chances.

Dinesh Chandimal brought up eighth hundred of his Test career to take Sri Lanka to a position of advantage at lunch on Day 2 of second Test against Bangladesh at Colombo. At the end of first session s play, Sri Lanka were comfortably placed after getting bowled out for 338 a total well beyond the par score. The three wickets Bangladesh managed this morning against the 100 runs were of Rangana Herath, Chandimal and Suranga Lakmal. The Lankan captain scored 25 off 91 balls and added crucial 55 runs for eighth wicket before being dismissed by Shakib Al Hasan. Chandimal, on the other end, was dismissed by Mehedi Hasan Miraz after adding another 55 with Lakmal, who was the last wicket to fall. Full Cricket Scorecard: Bangladesh vs Sri Lanka, 2nd Test at Colombo

If Day One was all about Chandimal s grit and determination, Day Two was no different. The only difference perhaps was he did not give any chance to the Bangladesh bowlers on Day Two. He did get a couple of reprieves on Day One, but he ensured he made them count, slamming a vital ton in the context of the game. His innings was a tutorial for young aspiring cricketers, as Chandimal batted extremely well, stitching crucial partnerships all through the innings. He first batted with the middle order, then the lower and later batted brilliantly with the tail. His hundred meant whatever little advantage Bangladesh had, has been snatched away from them.

The match was expected to start a bit early on Day Two after six overs were lost on Day One to bad light. It rained quite heavily later in the day and the ground staff did extremely well to get a timely start. Chandimal and Herath continued from where they had left on Day One and soon brought up their fifty-run partnership.

Soon after Sri Lankan innings touched the 250-run mark, Herath fell to Shakib s bowling. The ball went slightly away from him after pitching just outside the off stump. Herath was not prepared for it and he went for a premeditated drive, but ended up getting a thick edge which went to Soumya Sarkar, who took it after a couple of fumbles in the slip. It was Shakib s 459th wicket in international cricket across formats. Interestingly, he dismissed Herath to surpass the Sri Lankan veteran s tally of 458 international wickets and become the left-arm spinner with most wickets in the world across formats.

Bangladesh hoped to wind up the tail quickly, but from here on, Chandimal frustrated the visitors by playing extremely well with the tailender Lakmal. Meanwhile, he also continued his purple patch against the visitors. He added another hundred to his scores of 116*, 102, 40, 27, 100*, 5, 50*, 100 against Bangladesh; a team against which he averages 134.75 in Tests.

Chandimal farmed the strike well and unleashed his shots after he got to his hundred. After a flurry of boundaries, he fell to Mehedi, trying to loft him over the inner circle on the leg side. His knock of 138 came off 300 balls and included 10 fours and a six. Chandimal added 55 runs with Lakmal for the ninth wicket, of which the latter s contribution was a mere 7 runs.

After his dismissal, Lakmal went after the bowling and smacked a few boundaries before getting dismissed as the last batsman. He scored 35, his highest Test score, as Sri Lankan innings folded for 338. For Bangladesh, Mehedi picked 3 wickets, while Shakib, Mustafizur Rahman and Subashis Roy got 2 each and Taijul Islam got 1.

Sri Lanka will be extremely happy with their effort after being 70 for 4 at lunch on Day One. Niroshan Dickwella earlier today had said they will be looking at 275 runs on the board. Now that they have 338, the hosts will be upbeat about their chances.

The Day Two track has a lot for spinners, who can expect plenty of assistance as the day progresses. The bounce will be even and runs will come if batsmen are willing to work hard for their runs. Bangladesh can be one batsman short, as there is no update of Imrul Kayes availability, who was injured on Day One. 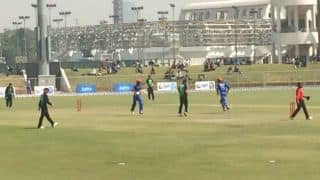