Dinesh Karthik added a feather to his cap when he helped stump Kane Williamson off the bowling of Yuzvendra Chahal as Sunrisers Hyderabad (SRH) lost their second wicket with 94 on board in the 10th over during their match against Royal Challengers Bangalore (RCB) in the eighth edition of the Indian Premier League (IPL) at Bangalore on Monday. Karthik equalled Adam Gilchrist and MS Dhoni for the record for most dismissals by a wicketkeeper — 66 to be precise. Live Blog: Royal Challengers Bangalore vs Sunrisers Hyderabad

Williamson’s dismissal halted SRH on their tracks, after the visitors were off to an explosive start thanks to some powerful hitting by David Warner, who brought up his fastest IPL half-century in 24 deliveries. SRH were cruising at 82 for no loss in the eighth over, before Warner was trapped leg-before off the bowling of Chahal, who did not take long to take his second wicket by removing Williamson.  Live Scorecard: Royal Challengers Bangalore vs Sunrisers Hyderabad

RCB earlier were bowled out for a score of 166 in 19.5 overs, with AB de Villiers and Virat Kohli scoring 46 and 41 respectively in what otherwise was an average batting performance by the home team. De Villiers built a platform for a big finish, but his dismissal led to a lower-order collapse as RCB lost their last four wickets for just 14 runs. Trent Boult was the pick among the SRH bowlers, with figures of three for 36. Live Streaming: Royal Challengers Bangalore vs Sunrisers Hyderabad 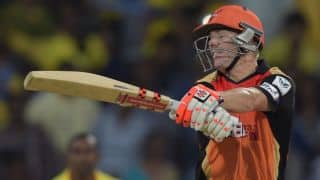 SRH on course to victory against RCB in IPL 2015