KKR slipped a rung to the fifth spot after a crushing 102-run defeat to MI at the Eden Gardens here on Wednesday.

KKR slipped a rung to the fifth spot after a crushing 102-run defeat to MI at the Eden Gardens here on Wednesday night, days after MI continued their dominance over the purple brigade with a 13-run triumph at home.

With three more games to go, KKR now have to win all of them to ensure their safe passage to the knockout stages and not leave their fate on other teams.

KKR take on Kings XI Punjab next followed by Rajasthan Royals at home, and table-toppers Sunrisers Hyderabad on the road to finish their engagements.

“I am very disappointed. But there are three games and we take one game at a time,” Karthik told reporters after their humiliating loss to MI which stretched their sorry record against Rohit Sharma’s side to eight straight reversals on the trot.

“So if we win the games I know we have a great chance of getting to the playoffs. I believe in that and want my teammates to believe in that,” Karthik said.

The heavy defeat, the largest margin in the ongoing edition of the Indian Premier League (IPL), saw KKR’s net run rate plummet to -0.359, the worst among eight teams in the tournament.

“After this game, our run rate has taken a hit. We will take a call as the run rate has come to minus now. If we play three good games, it will go up,” Karthik said.

Ishan Kishan’s 21-ball 62 in the middle overs took the game away from KKR, Karthik said.

Mumbai posted a mammoth 210 for 6 in reply to which KKR got bundled out for just 108, their first all out of the season.

“He changed the run rate and played some nice shots. We bowled in an area he could have got out but he took on the bowlers at that stage.”

Left-arm spinner Kuldeep Yadav, on whom KKR depend a lot, was hit for four consecutive sixes in the 14th over which turned the game in favour of MI. Kuldeep, a regular for India across formats, went for 43 runs in three overs.

“He is somebody who brings in a lot of control in the middle overs,” Karthik said of Kuldeep.

“And when he goes for runs it’s hard. This game he went for a few runs, in the middle they took him down a little bit but these things happen in a game of cricket.

“He gets picked in all three formats and he is a confident young guy. He knows it’s one of those bad days which every bowler has in a T20 format.”

Karthik added that the wicket was good for batting and 190 was a par score.

“The wicket was good, 190 would have been par. It was 20 runs over par which made a lot of difference.”

MI, after Wednesday’s win, made it 18 triumphs over KKR, eighth in a row, in 23 meetings.

Karthik though said it’s unfair to blame this unit full of new faces including himself.

“We are a new team and a young team. I understand stats wise maybe as a team KKR has not (played well against Mumbai) but this is a new team with lot of new players so we were hardly aware of these things.

“If we do 3-4 years down the line the same thing, then I think that’s a fairer question. But these have happened with different teams and we are a new set of boys. It’s unfair to label that blame on us even though as a team KKR has lost so many matches which I accept.” 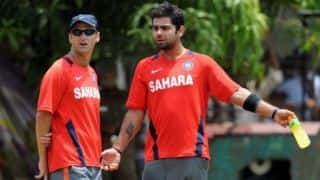