Dinesh Karthik Wants to Win IPL Trophy For 'Cyclone-ravaged' Kolkata, Says That's The Lead we Can Do For T

Karthik said the proposed ban on saliva when cricket resumes post-COVID-19 will be a massive challenge for the bowlers in the longest format. 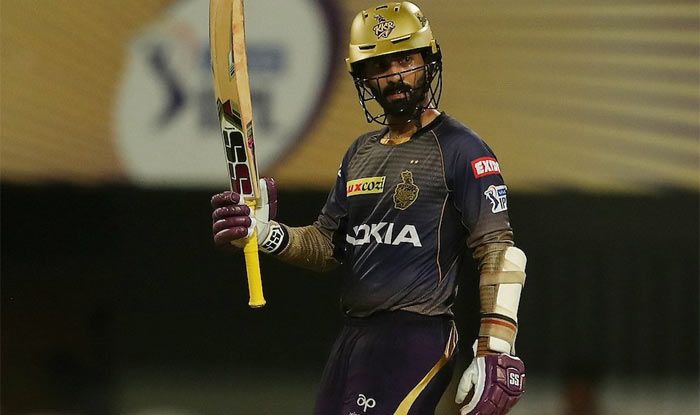 India veteran wicketkeeper-batsman Dinesh Karthik said dealing with the uncertainty of not knowing when he would play next made him feel disoriented during the COVID-19 enforced lockdown. The nationwide lockdown, that was imposed to stem the spread of the coronavirus, started on March 25 put a grinding halt on all the sporting activities throughout the country. There is speculation that the BCCI wants to hold the indefinitely postponed IPL in the October window if the T20 World Cup in Australia doesn’t go ahead as per schedule.

Karthik, who captains IPL franchise Kolkata Knight Riders (KKR), wants to win the coveted trophy, if the tournament takes place, and put a smile on the faces on its natives. The 35-year-old said he and his teammates will dedicate the trophy to the people of West Bengal facing twin crisis of COVID-19 and Cyclone Amphan.

“We are definitely emotionally very attached to Kolkata. They are really proud of us. The state has gone through a lot in the last couple of months. So I think winning the IPL, is the least we can do for the state,” Karthik, said on the sidelines of the launch of KKR’s Sahayata Vahan (van) initiative, which will help distribute essential kits to people affected from COVID-19 and the cyclone across mutiple locations in the state.

Asked whether dew would be a problem if IPL was held in October, Karthik said they would cross the bridge when it comes but the two-time champions will be prepared.

“We don’t know yet. Even if the IPL happens, is it going to be like the home and away basis or it’s going to be held in one centre. There are a lot of variables to this. But even when we play in the month of April-May, I can tell you that Kolkata has a strong amount of dew so teams like to chase.”

Speaking about the lockdown and mental stress everyone going through during these unprecedented times, Karthik said at times he felt disoriented with not knowing about the immediate future. Since then, all cricketers have been confined to their homes through restrictions have been relaxed gradually.

“In the lockdown, initially, I was happy to train, I was happy to be at home doing stuff, but it got (extended) 2, then 3 and 4 weeks, I was kind of disoriented. I don’t know when my next cricket game is, what am I training for, it was boring at times,” Karthik said on Star Sports’ show ‘Cricket Connected’.

Luckily Karthik’s wife Dipika Pallikal, who is as an international squash player, also dealing with a similar situation and he drew inspiration from her.

“So, then I see this person who is playing an individual sport, go and push yourself every day you know. The same situation, she doesn’t know when the next tournament is. I have a feeling cricket will probably start before squash, but she’s still training like this without any game around the corner,” he said.

Karthik said the proposed ban on saliva when cricket resumes post-COVID-19 will be a massive challenge for the bowlers in the longest format.

“Oh, yes, definitely (it will be a big challenge). I think in ODIs and Twenty20, it won’t make much of a difference but definitely in Tests, it’s going to be a massive challenge.

“It will be tough especially for the bowlers, because when the ball is new for the first 20-30 overs, in most grounds in the world, I think conventional swing is what they look for. And if you don’t apply saliva, it’s going to be a tough ask for them to swing the ball,” he said.

Karthik reiterated it will take at least four weeks for player to reach match fitness and one must not rush into training.

“I think it will take at least 4 weeks, especially for the fast-bowlers because they are coming off a very quite time, to go and start bowling 140-150 clicks through the day, at different points of the day when the heat will vary, it’s going to be a good challenge for them, a massive challenge for them,” he added.