Dinesh Karthik came out in the middle with India needing 34 runs off 12 balls. It was Karthik’s blitz that gifted India a title win in the Nidahas Trophy 2018 against Bangladesh by 4 wickets. He smoked 29 off just 8 balls enabling India overcome a difficult task after some tight bowling by Bangladesh in the death overs.

Rohit Sharma and Shikhar Dhawan came out on a mission. They clobbered Bangladesh s spinners quite early in their spell. Rohit cherished his rivalry with Mehedi Hasan; picking 16 runs off 3 balls in just the second over of the innings.

Dhawan soon joined the festivities as well, smacking a six on the back foot against Shakib Al Hasan. Shakib got his revenge in the same over, getting rid of Dhawan (10), who played a cross-batted shot. Suresh Raina came in the middle and got out within a span of 3 balls. It took an eagle-eyed Mushfiqur Rahim to pick up a faint tickle off Raina s glove and opt for the review. Rubel Hossain getting his first wicket of the match.

KL Rahul came out in the middle with Rohit Sharma going hammer and tong. The pair absorbed pressure and marched India towards their goal. Rohit during his knock surpassed 7,000 T20 runs as well; third Indian after Raina and Virat Kohli.

The pair also brought up their 50-run partnership. Rahul (24) notched up his 500th T20I run, but fell while pulling a short ball. He handed a simple catch to the fielder at deep square leg, Rubel getting his second wicket.

Manish Pandey joined Rohit, as the latter brought up his 14th T20I fifty. Pandey s inability to score runs saw pressure build on Rohit, and he in the heat of the moment gave his wicket away. Rohit (56) hold out to long on against Nazmul Islam, who was playing his first game of the series.

Vijay Shankar came out ahead of Karthik in a bid to up the scoring rate. Pandey soon unshackled himself, and the flow of boundaries came rushing in. Shankar batting for the first time in India colours, showcased composure and picked crucial boundaries.

Mustafizur Rahim came back into the attack and bowled an incredible 18th over. Shankar wasted four balls before running a single. Pandey, buried under pressure, handed a catch to the fielder at long off. He made 28 off 27.

India needed 12 off six balls. Only 7 runs were scored from the first 5 balls including Shankar’s wicket. Thankfully, Karthik was on strike for the final ball of the innings. He flat-batted Soumya Sarkar for a six over extra cover to gift India the Nidahas trophy.

He remained unbeaten on 29* along side Washington Sundar, who did not face the ball.

Bangladesh batting first managed to post 166 for 8 on the board. Sabbir Rahman anchored their innings with a stroke-full 77. Bangladesh were helped by some power hitting by Mehedi Hasan in the final over as well, taking 18 off Shardul Thakur. Yuzvendra Chahal and Jaydev Unadkat stared with the ball for India, picking 5 wickets between themselves.

Man of the Series: Washington Sundar 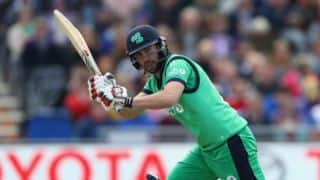