India recorded their only sixth Test win on Australian soil when they beat the hosts on Monday by 31 runs.

Coach Ravi Shastri was a happy man after India ‘s nerve-shredding win in the series opening first Test against Australia at the Adelaide Oval on Monday. Chasing 323, India broke through a late resistance from the home team’s lower order and bowled them out on 291 for a 31-run win.

This was India’s only sixth Test win on Australian soil and the first time that they began a series Down Under with a favourable result. Kohli thus became the fourth Indian captain to win a Test match in the country after Bishan Singh Bedi, Gavaskar, Sourav Ganguly and Anil Kumble.

Shastri is impressed with the discipline shown by the India bowlers. “Very very happy with this win,” Shastri said after the match. “It was a tough, tough Test match. The boys were disciplined and they stuck to their task. We lost in England by 31 runs, we lost a close first match in South Africa by around 60 runs but this is a very good win, feels really good. There’s belief in the team when you get off to a good start.”

After winning a good toss, India opted to bat and slipped to 127/6 before Cheteshwar Pujara’s superlative century bailed them out and to a decent 250-all out in the first innings. A series of poor shot selection was the hallmark of the batting collapse and Shastri pointed it out saying they played “foolish cricket” but quickly rectified in their second essay. “There were some rash shots played [in the first innings], some foolish cricket but they learnt from their mistakes and rectified it in the second innings,” Shastri said.

The pace trio of Jasprit Bumrah, Ishant Sharma and Mohammed Shami picked up 15 of the 20 wickets across the two Austrlaia innings and clocked 123.4 overs between them.

The second Test start’s in four days and Shastri reckoned that the pacers will be resting during the short-break in order to be match-ready for Perth. “They’ll have to rest (and be fully fit for Perth. There’s plenty on offer for the fast bowlers but they’ll have to be at their best. The pacers were brilliant in the first innings, something they’ve worked on. As a bowling unit when you show such kind of discipline, you can put any side under pressure.

While Rishabh Pant made headlines with his record-breaking feat behind the stumps and constant chirping that even saw the host broadcaster turning off the commentary for an over, his batting has drawn severe criticism. Despite India struggling, Pant hasn’t shied away from playing his natural attacking game that has often seen him throwing away his wicket.

Shastri came to his defence. “You have to allow him to play his [natural] game. He has to be a bit sensible and smart now. If he makes a mistake I’ll be in his ears,” he said. 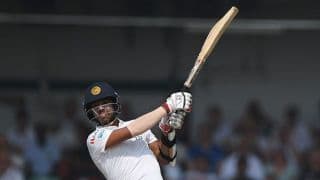