Indian bowlers stifled Australia's batsmen in the death overs to restrict the hosts to 252 for nine in a critical league match of the ongoing ODI cricket tri-series on Sunday. 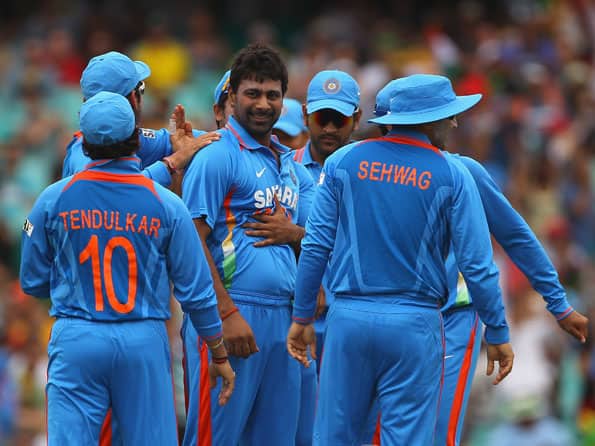 Indian bowlers stifled Australia’s batsmen in the death overs to restrict the hosts to 252 for nine in a critical league match of the ongoing ODI cricket tri-series on Sunday.

Praveen Kumar provided two early wickets; Umesh Yadav chipped in with a couple of scalps in the final two overs but Virender Sehwag was the surprise package with 3 for 43 from his nine overs.

In the final 10 overs, India conceded only 47 runs.

The talking point at the ground though was the “obstructing the field” appeal by the Indians against David Hussey in the 24th over which was over-ruled by onfield umpires, after direction from third umpire Simon Fry.

It was Ravichandran Ashwin’s seventh over and Australia were 119 for 4 when left-hander Matthew Wade hit the ball into the covers.

Suresh Raina swooped on the shot and threw it hard at the keeper Mahendra Singh Dhoni. Hussey, then on 17, dashed down from the non-striker’s end in a flash.

He found himself in line with the throw and instinctively thrust out his right hand to fend himself.

However, the Indians viewed it as obstruction of field and skipper Dhoni appealed against the batsman.

However, after long deliberation, the decision was given in favour of the batsman. The umpires’ view was that Hussey wasn’t trying to obstruct the field but was trying to save himself from a physical injury.

As umpire Billy Bowden resumed his position at the striker’s end, Dhoni and other Indian fielders followed him and argued. Dhoni clearly wasn’t in sync with the decision and gave the umpire his piece of mind.

It was a critical moment of the game for both teams, more so for India who were just a wicket away from assuming the ascendancy in the game.

India had begun well through Praveen, who immediately made his presence felt after being given a game on account of Vinay Kumar’s hamstring injury.

Praveen began with a maiden and then took the wickets of stand-in captain Shane Watson (1) and Peter Forrest (7) in his first spell of 7-1-22-2.

Watson pulled a short-delivery from Praveen into the hands of the mid-on fielder while Forrest tried to cut a rising delivery too close to him and dragged it down on to his stumps.

Warner and Mike Hussey (10) then tried to stem the rot before the latter fell by way of run-out. Hussey drove Ashwin past covers to long-off and sensing a second run went for it as his partner Warner had initially responded.

Warner then changed his mind and Hussey was too way down the track to turn and regain the non-striker’s crease. Fielder Irfan Pathan was good with his throw and Ashwin did the rest.

India’s stranglehold was loosened when Umesh Yadav was introduced in the 15th over. The medium-pacer conceded 20 runs in his two overs, much to Warner’s benefit who completed his half century by thrashing him through the covers, needing 48 balls with five fours.

Warner left as soon as the 100 of the innings was posted.

He tried to sweep a fullish delivery from Ravindra Jadeja in the 21st over.

As the ball looped up in the air, both Suresh Raina, from inside the circle, and Irfan Pathan at fine leg, dashed for it.

Raina, running with the ball, took a splendid catch but couldn’t avoid the on-rushing Pathan and both collided in a terrible manner. However, both escaped without any serious injury.

Warner made 68 off 66 balls and hit seven fours during his knock. Australia were 107 for 4 in the 21st over and in trouble.

Then the “obstruction of field” appeal went Australia’s way and Wade and Hussey didn’t need any other invitation to turn the situation around for their team.

The two batsmen matched each other stroke for stroke and briskness between the wickets. Wade completed his half century with a massive six over midwicket off Ashwin.

However, the left-hander departed in the 40th over while trying to steer a delivery from Umesh Yadav, caught comfortably by Dhoni.

Wade made 56 off 66 balls with two fours and a six and shared a 94-run fifth wicket stand with Hussey off 110 balls.

The latter completed his half century in the same over, facing 58 balls and striking two fours. Australia were 205 for 5 after 40 overs.

Yadav made it a twin strike when he made one rise on Hussey and the batsman, trying to slash it, edged the chance behind the stumps. The junior Hussey made 54 off 64 balls with two fours. Australia were 212 for 6 in the 43nd over.

India built on these two successes when Sehwag claimed a wicket in the 44th over, drawing Clint Mckay forward and Dhoni effecting a stumping. Australia were 217 for 7 in the 44th over with last three wickets being claimed in the space of 23 balls for 16 runs.

Sehwag too built on his success when he lured Brett Lee (4) into hitting a catch in the deep where Virat Kohli held an easy catch. (PTI)

The importance of protective gears must be instilled in young cricketers