The Indian bowlers put in a consolidated performance to restrict Pakistan to 118 for 5 in ICC WorldT20 2016 Match 19 at Eden Gardens.

India’s bowlers once again came to the party as the Pakistan batsmen struggled to come to terms with the sluggish Eden Gardens pitch to score 118 for 5 in the rain-shortened T20 World Cup 2016 match. It took a couple of cameos from Shoaib Malik and Umar Akmal to take the Pakistan total past 110. Sharjeel Khan and Ahmed Shehzad took their time to get going, both men finding the boundary now and then but also facing a lot of dot balls. Ashish Nehra and Ravichandran Ashwin opened bowling, and it was immediately apparent that this was not a pitch the batsmen would enjoy playing on. Ashwin especially was unplayable, getting the ball to spit and turn. Live Cricket Scorecard: India vs Pakistan, ICC World T20 2016, Match 19 at Eden Gardens

To their credit, both Pakistan openers managed to survive Ashwin’s crucial opening spell. Though they were unable to score freely, they kept wickets intact. It was with the introduction of Suresh Raina that India got their first wicket. Ironically, with the ball turning square it was a long hop that produced the wicket. Raina pitched one short and Sharjeel tried to pull only to get a top edge to Hardik Pandya. Pandya managed to take a fine catch, but ended up hitting his head on the ground in the process. He managed to recover in time to bowl later in the innings. Pakistan were 38 for 1 in the eighth over. Shahid Afridi, fresh from a 19-ball 49 against Bangladesh, promoted himself to No. 3. LIVE CRICKET UPDATES: India vs Pakistan, Group B Match 19 of ICC T20 World Cup at Eden Gardens

The move did not prove to be too successful. Shehzad and Afridi tried to go after the bowling, but the Indians continued to bowl well and the pitch continued to play tricks. If the Nagpur ptich was “diabolical” the Eden Gardens track was absolutely unplayable. Ravindra Jadeja managed to turn the ball from leg past off, which seemed to put Afridi completely off his game. Shehzad was looking like the best batsman on display till that point, but he ended up top-edging one from Jasprit Bumrah to Jadeja for 25 off 28 balls. Pakistan were now 46 for 2 in the 10th over. Afridi followed a couple of overs later, mis-hitting a pull shot off Pandya to Virat Kohli for 8 off 14 balls. READ: India vs Pakistan, ICC World T20 2016, Match 19 at Eden Gardens, Kolkata: Highlights from first innings

That brought Malik in to join Akmal. The duo managed to kick up the scoring rate, hitting a six each off the 14th over of the innings, bowled by Pandya. For the first time in the match both batsmen were batting at a strike rate over 100. Malik hit Bumrah for back-to-back boundaries in the next over, and then hit one off Jadeja after that. Jadeja got his revenge when he had Akmal edge behind to MS Dhoni for 22 off 16 balls. It was an invaluable innings in the context of the match.

Nehra, bowling the penultimate over of the innings, struck a huge blow when he had Malik top-edge a pull to Ashwin at fine leg. Malik was dismissed for 26 off 16 balls with 3 fours and 1 six — a game-changing innings along with Akmal’s. The over cost 8 runs, which was not too bad in the context. Bumrah was brought on to bowl the final over ahead of Ashwin, and he responded by conceding 5 runs off the bat as Pakistan scored 118 for 5 in their 18 overs. 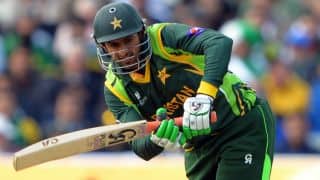