Smart, hard-working knocks from Hashim Amla and Rilee Rossouw, and an all-round, disciplined bowling performance have given South Africa a 20-run win against New Zealand in Centurion. Chasing 305, the visiting side were in the hunt in phases, but bursts of wickets hurt them, and no one held up an end to stay till the end. On the contrary, South Africa had Amla staying almost till the end, scoring his 21st ODI ton, to be the joint-highest South African century-maker in ODIs, and this facilitated the injection of a bit more momentum towards the end, via other middle-order batsmen, to get past 300. In reply, New Zealand had Tom Latham, Kane Williamson and Jimmy Neesham threatening to do the same, but the execution of it was not allowed by the discipline and guile shown by the bowlers. UPDATES: South Africa vs New Zealand, 1st ODI, Centurion

New Zealand lost a wicket in the first over, but it could have been worse: Dale Steyn had two dropped chances off him in that over before the third was grasped by Amla in the slips. Williamson, the captain, played slowly and softly to play out the initial burst of the fast bowlers. He had put on a century stand with Latham when, in an attempt to loft the spinner Imran Tahir for a boundary, he provided a catch to the cover fieldsman.

Wickets fell quickly thereafter, as Martin Guptill, Grant Elliott, and Latham departed within a few moments of each other. Jimmy Neesham and Colin Munro put together an attacking stand, hitting nine fours and a six between them, in their 71-run stand in 10.5 overs, but once both had departed, by the 44th over, the contest seemed all but over. The lower order brought New Zealand closer than was expected, but it was too little too late. Tahir’s two wickets were the ones that broke useful stands, and although three more bowlers took two wickets each, his contribution was perhaps most critical. SCORECARD: South Africa vs New Zealand, 1st ODI, Centurion

South Africa’s score was built on Amla’s solid century that ended his run of poor form. After the initial boundaries scored out of the comfort of the pace generated by New Zealand’s fast bowlers, he slowed down, and with Rilee Rossouw, knelt down to grind a secure innings. That he did, to win the Man of the Match award. 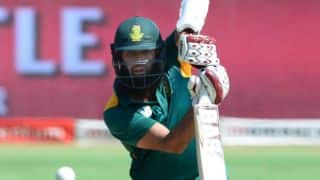