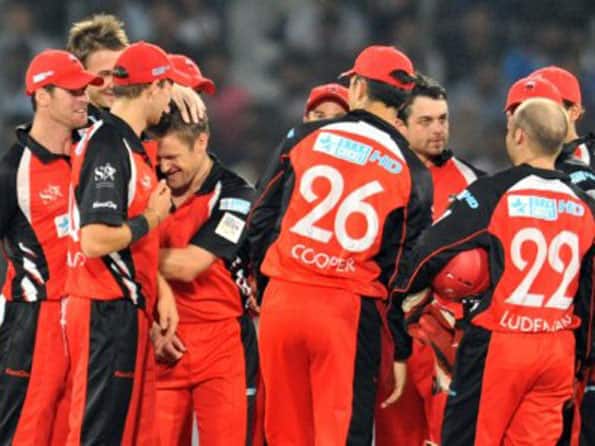 Ferguson produced a blistering 40-ball 70-run unbeaten knock and together with Daniel Christian (42) added 84 runs off just 48 deliveries for the fourth wicket to help South Australia post a challenging 188 for five in their 20 overs.

And then the Australian team produced a disciplined bowling and fielding effort to restrict KKR to 169 for nine.

Manoj Tiwary top-scored for KKR with 40 off 31 balls while Ryan ten Doeschate (32 off 16) played a useful handful towards the end.

Gary Putland (3/31) and Daniel Harris (3/42) shone with the ball for South Australia sharing six wickets between them.

For KKR, it their second consecutive defeat after having lost to Somerset by five wickets in their tournament opener.

On the other hand, the win opened South Australia’s account in the tournament following their 50-run loss to Warriors in the opening match.

Chasing the steep target Tuesday, KKR were never in the hunt as they lost wickets at regular intervals.

Opener Manvinder Bisla (13) showed promise hitting Nathan Lyon for three fours in the first over before he was cleaned up by Kane Richardson in the next.

Shakib Al Hasan (13) and Gambhir (9) failed to live upto their reputation and were dismissed cheaply as KKR slumped to 51 for three after seven overs.

Jacques Kallis (20) and Tiwary raised visions of a fightback stitching 35 runs off 25 balls for the fourth wicket before the former was snared caught and bowled by Harris.

Big-hitting Yusuf Pathan (5) and Tiwary then departed in consecutive overs to make life difficult for KKR.

But towards the end, Ten Doeschate and Rajat Bhatia played good little cameos to bring down the defeat margin for KKR.

Earlier, Ferguson scored an unbeaten half-century while Christian made a quickfire 42 to help South Australia post the challenging total on a slow Rajiv Gandhi stadium wicket.

Ferguson mixed caution with aggression to anchor the South Australia innings. He struck five boundaries and four sixes during his unconquered knock.

The 48-ball 84-run fourth-wicket stand between Ferguson and Christian was the highlight of South Australia innings.

Christian matched his partner stroke for stroke and hit four fours and two sixes during his 27-ball stay.

For KKR, Laxmipathy Balaji picked up two wickets for 27 runs.

But just when it was time to capitalise both the batsmen gave away their wickets.

While Harris miscued a cross-bated heave to give a simple catch to Iqbal Abdullah off Balaji’s bowling, Klinger was run out in search of a risky single.

Cameron Borgas (14 off 13) too departed early, caught by Balaji at deep square leg off Pathan.

Ferguson, however, grabbed with both hands the life he got in the 13th over on individual score of 18 when Kallis dropped him at the long-on boundary off Pathan.

Ferguson added salt to Pathan’s wound by spanking him for three boundaries and a six to pick up 20 runs of his next and innings’ 15th over.

Christian was not to be left behind as he hit Abdullah for a four and six to notch up 15 runs of the next over.

Both the batsmen used their long handle to great effect towards the end to score a mammoth 50 runs of the last three overs.(PTI)

Man of the match: Callum Ferguson

Ferguson and Christian took the match away from us: Gambhir