Kohli was taken by surprise after a user said that he is an overrated batsman and prefers to watch England and Australia batsmen.

Virat Kohli, who has been rested from the ongoing three-match Twenty20 International series against West Indies, has found himself embroiled in controversy after a video that has gone viral on social media shows the India captain saying that those who prefer English and Australian batsmen should not live in India.

The video, available on Kohli s recently-launched app, shows Kohli reading out messages to him by fans sent to him via Twitter and Instagram.

Kohli, who went past Sachin Tendulkar s record to become the fastest to reach 10,000 runs in the ODI series, was taken by surprise after a user said that he is an overrated batsman and that he prefers to watch England and Australia batsmen.

Over-rated batsman and personally I see nothing special in his batting. I enjoy watching English and Australian batsmen more than these Indians, the user said.

Kohli, who recently turned 30, has faced severe backlash for his comments. Some even reminded him of his comments during the U-19 Cricket World Cup in 2008 when he said that his favourite cricketer was former South Africa opener Herschelle Gibbs. 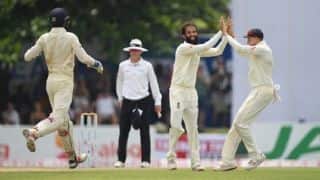