CSK would look to bring focus back on cricket when they take on KXIP.

Distracted to an extent by off-field furores surrounding them, two-time former champions Chennai Super Kings (CSK) would look to bring the focus back on their cricketing prowess when they take on a revamped Kings XI Punjab (KXIP) in their Indian Premier League (IPL) opener at Abu Dhabi on Friday.

The Chennai outfit, the most dominant team in the past three seasons, is still reeling under the spot-fixing scandal, in which some of its top officials have been implicated besides a few players also being under the scanner.

Coach Stephen Fleming has been candid enough to admit that off-field issues cannot be just brushed aside and are like a distraction for the team, which under normal circumstances comes across as a well-oiled machine on a mission.

“There’s a lot going on, I won’t lie. There are a lot of distractions (leading up to the tournament). I think we were all uncertain about how it was going to play out,” Fleming said in a subtle reference to the betting controversy which is now under a Supreme Court-monitored investigation.

But for the spot-fixing controversy which has rattled it, CSK led by India captain MS Dhoni can safely be called one of the most consistent teams in the IPL.

This year, CSK would be without some of their most reliable stars, including Australian mainstay Michael Hussey and South African Albie Morkel, after losing them in the players’ auction.

On the bowling front, West Indian leg-spinner Samuel Badree could prove to be an important player given that his confidence is sky-high after finishing the third highest wicket-taker in the recent ICC World T20 2014.

Up against them are the Kings from Punjab. The franchise, which until the last season seemed lost in the celebrity event, have managed to instill balance and sheen to the side by making some smart purchases in the players’ auction.

Led by Australian George Bailey, Punjab pulled off quite a masterstroke by snapping up India Test discard Virender Sehwag. Even though he is no longer in his prime but on his day, the Delhi-dasher is an enthralling game-changer capable of mortifying opposition attacks.

“No doubt, he will have a big impact. Having him around the group is a great thing. It will be great for him to go out and play with freedom,” Bailey had stated ahead of the tournament.

Another masterstroke by KXIP at the auction was the purchase of Mitchell Johnson. The Australian speedster is in the form of his life and is likely to be worth every one of the Rs 6.5 crore that the KXIP splurged on him during the auction.

Besides, the team also managed to bring back Australian batsman Shaun Marsh. Fitness-permitting, Marsh has a decent track record in the IPL and could prove to a crucial cog in the KXIP wheel.

Given the way the two teams match up on paper, it promises to be a battle of the equals. 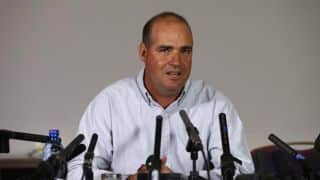