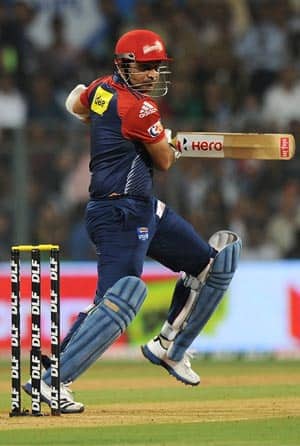 Everything fell in place perfectly for Delhi, right from winning the toss, as they bundled out the hosts for a paltry 92, the lowest team total of the current edition, and then overhauled the target by losing just three wickets with 5.1 overs to spare.

Chasing a meagre total, skipper Virender Sehwag top scored for Delhi with a patient 32 off 36 balls while Mahela Jayawardene remained unbeaten on 17 in company of Kiwi batsman Ross Taylor (11).

Taking full advantage of the MI batsmen’s rash display with the bat, the Delhi bowlers attacked from the first over to reduce the hosts to a sorry-reading 44 for six by the 12th over to make it a virtual no-contest at Wankhede Stadium track, offering good bounce.

Host skipper Harbhajan Singh made a counter-attacking 33 off 22 balls, with five fours and a six, after Rohit Sharma prospered a bit while making a chancy 29 off 27 balls with five fours, but the rest of the batsmen self-destructed.

Earlier, recklessly batting by Mumbai Indians saw them collapse to 92 all-out in 19.2 overs.

Sent in to bat, MI had lost half their side within the first 10 overs, results of either rash shots or poor running between the wickets.

The hosts then recovered somewhat through a belligerent knock of 33 off just 22 balls with five fours and a six from skipper Harbhajan Singh, but the final tally looked well below par for the course.

It was also their second-lowest in IPL history, a shade better than the 87 all out against Kings XI Punjab last year at Mohali.

In the top order, only Rohit Sharma contributed with a chancy 29 in 27 balls with five fours while the others fell for single digit scores, including last match’s man of the match Kieron Pollard who was out for a 3-ball 1.

For the Daredevils, who came here after hammering last year’s winners Chennai Super Kings at home, the wickets were shared by their impressive bowling attack.

Mumbai Indians got off to a shock start by losing both their South African openers with only 5 on the board.

Davy Jacobs, included for the first match in the season, tried a cross-batted heave against left arm spinner Nadeem and was bowled comprehensively for a duck in the second over.

His compatriot Richard Levi too did not prosper much and was also guilty of trying an audacious pull off Nadeem and under-edged the ball on to the stumps to leave MI reeling in the fourth over after being sent in to bat by Daredevils captain Virender Sehwag.

Rohit Sharma tried to attack from the first ball and played a couple of glorious lofted off drives but was also lucky that three other ambitious shots were top-edged to the boundary, two of those off Morne Morkel.

Even as he was settling down he saw the backs of Ambati Rayudu (4), out to a very poorly judged and attempted single, and key batsman Kieron Pollard.

Rayudu scampered for a non-existent run after being struck on the pads by Ajit Agarkar who was given his first match of the season. Partner Rohit never budged from the non-striker?s spot. The batsman was so far down the pitch that even a misdirected throw by fielder Yogesh Nagar could not help him regain the crease.

Tottering at 30 for 3, things became worse when Pollard was caught trying to cart Umesh Yadav out of the ground and getting a leading edge for the catch to drop into the waiting hands of Ross Taylor.

Dinesh Karthik too played poorly as his attempted pull off Yadav resulted in a simple catch to mid-on fielder Kevin Petersen as the ball hurried on to the batsman and at 44 for 6 in the 11th over, MI?s tail was exposed.

Skipper Harbhajan Singh used the long handle to good effect by slamming Agarkar for two fours and a six in the 12th over that yielded 17 runs to help MI pass the 50 mark.

But for the MI captain and his stand of 34 runs with Clint McKay, who was playing his first game of IPL5, the total would have looked even more pathetic than it did.

Harbhajan played in his usual manner, using his bat with purpose to club blows, and but for his ebullience the story would have been sorrier for MI.(PTI)

Man of the Match: Shahbaz Nadeem