Ravi Bopara produced England's best ever Twenty20 bowling performance to set up a crushing 10-wicket win over the West Indies in the first game of a two-match series at the Oval on Friday. 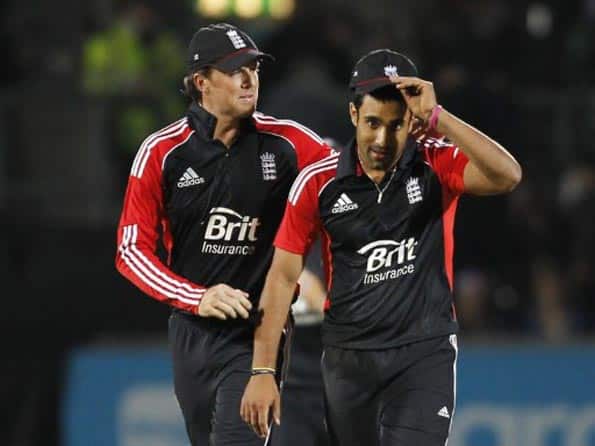 England captain Graeme Swann claimed several players have made a case for inclusion in the squad for next year’s T20 World Cup in Sri Lanka. AFP

Ravi Bopara produced England’s best ever Twenty20 bowling performance to set up a crushing 10-wicket win over the West Indies in the first game of a two-match series at the Oval on Friday.

The Essex all-rounder took 4-10 with his medium pace, eclipsing the previous best mark of 4-22 jointly held by Paul Collingwood and Jade Dernbach, as the tourists slipped from 52-0 to 125 all out.

World champions England then cruised to victory, with 28 balls to spare, Alex Hales making 62 not out and Craig Kieswetter unbeaten on 58.

England captain Graeme Swann claimed several of his players have made a case for inclusion in the squad for next year’s Twenty20 World Cup in Sri Lanka.

“We can take a lot of credit for the way we approached this game. We are trying to take these two games very seriously with the World Cup coming up and this has a gone a long way to confirming one or two players into that squad if not into the final 11,” he said.

The West Indies got off to a flying start but the introduction of the slower bowlers — Samit Patel (2-23), Swann (1-30) and Bopara — stalled the run rate and a rash of wickets saw the tourists collapse from 97-2 to a below par total.

But their captain Darren Sammy did not seem to heed the lessons of his side’s innings and didn’t introduce his slower bowlers until the eighth over.

By then England were 66 without loss and had the game under control.

Hales, who made a second ball duck in his only previous international against India, passed 50 from 36 balls and Kieswetter did the same shortly afterwards taking 41 deliveries and England passed 100 in the 12th over on their way to a convincing win.

Sammy said: “We were always on the back foot. We had a great start but when we let them in we did not bounce back and that’s that.

“We were playing the number one team and whoever they bring in seems to do well.”

It had seemed a different story when West Indies had been put in by Swann.

They raced past 50 in 35 balls with Dwayne Smith helping himself to 20 off one over from Tim Bresnan before the spinners arrived and put the brakes on the scoring rate.

With one over of the batting powerplay left Swann opted to give Patel a bowl, rather than having an over himself, and was rewarded with the wicket of Smith who was bowled for 33 by a ball that turned past his outside edge and hit off stump.

Johnson Charles made 33 and Danza Hyatt 26, but the rest of the West Indies batsmen failed to make double figures.

Swann brought himself on to dismiss Marlon Samuels and sensing that the pitch was more suited to slower bowling, the stand-in captain gave Bopara a chance with his gentle medium pace.

The switch halted the West Indians’ progress and they crawled to 72-2 off 12 overs, before Hyatt decided he had enough and hit Swann for two sixes and one four.

But Bopara tore the heart out of the batting, dispatching Nkruma Bonner and Chris Barnwell in successive deliveries and adding the scalps of Hyatt and Sammy.

The sides meet back at the Oval again on Sunday. (AFP)