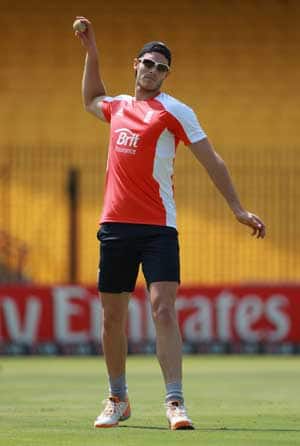 DRS, which allows teams to make two incorrect challenges to an on-field umpire’s decision before all their referrals for that innings are used up, has broadly been accepted by most of cricket’s leading nations and was in use at the recent World Cup in the subcontinent, which India won.

However, India have been opposed to the system almost from the moment of its inception in 2009 and, despite International Cricket Council (ICC) calls for it to be used in all major matches, are adamant they want no part of it in England.

As both teams have, in effect, to agree to its use that means it won’t feature in the four-Test series starting next month that forms the centrepiece of India’s upcoming tour of England.

The system is currently being used in the ongoing England-Sri Lanka Test series that concludes with the third Test at the Rose Bowl starting Thursday.

Tremlett, who has benefited from the system, said the ICC should insist on its use in all Tests.

“I am a fan of the system. If the technology is there it should be used,” Tremlett said.

“Who knows why they (India) don’t want it involved? There have been a few decisions that have been rightly overturned and as a bowler you want those decisions given out. It’s a fair way of doing things. I’m fully in agreement with it. It’s something that we like to use and it should be used in every Test if the technology is there and it’s a shame that they don’t want DRS involved in the India series.”

The Board of Control for Cricket in India (BCCI) have questioned the accuracy of the technology involved but Tremlett said: “It is very accurate. Sometimes there is a lot of noise around a Test match and an umpire might not hear a fine nick so it’s an important thing to have.

“It has been a successful thing over the last six months.”

Victory at the Rose Bowl, where Surrey paceman Tremlett made his name for Hampshire before crossing the border at the start of last season, would take England into joint-second with South Africa in an ICC Test ranking table currently topped by India.

Tremlett, who played a key role in England’s Ashes-winning series in Australia with 17 wickets in three Tests, said: “There’s no reason why we can’t win that series against India. This side is going from strength to strength and we’re on a good winning streak at the moment.

“I’m fully confident that we can beat any side,” added Tremlett, whose four second innings wicket set up England’s first Test victory against Sri Lanka that left them 1-0 up with one to play against the tourists after a draw at Lord’s. We had success against Australia but the next step is to beat the number one side in the world. If we can beat them convincingly then we will deserve to be number one.”