Batting legend Sunil Gavaskar would love to see MS Dhoni be part of India’s squad at the ICC Men’s T20 World Cup in Australia but fears the team has moved on from the former captain.

Dhoni hasn’t played competitive cricket since ODI World Cup in England last year. There have been talks that a good IPL could push his case for international return but with the coronavirus threatening a cancellation of the league this season, it has cast further shadow for the two-time world cup winning captain’s future.

“I would certainly like to see Dhoni play T20 World Cup but it looks unlikely,” Gavaskar told Dainik Jagran. “Team has moved on. He’s not someone for big announcement. So in my opinion, he’ll quietly say goodbye to the game.”

The IPL, which was scheduled to get underway from March 29, has been suspended till April 15. Gavaskar reckons should the threat of virus die down in the upcoming weeks, the tournament will go on but is unsure whether overseas cricketers will be part of the cash-rich T20 league.

“If the situation improves in the coming few weeks then it’s possible to host IPL. But we don’t know whether the cricket boards of foreign cricketers will permit them to travel to India. Fortunately, there’s a window around June-July when IPL can be held as not a lot of international matches are scheduled during that time,” he said.

Gavaskar also commented on India’s Test struggles in New Zealand where they were clean swept 0-3, the first time they lost a Test or series since the beginning of ICC World Test Championship.

“The New Zealand pitches weren’t easy in to bat on. It’s understood that our batsmen struggled but even the New Zealand batters faced difficulties. Their captain Kane Williamson didn’t score too many runs either and we know how good a batsman he is,” said Gavaskar who was the first to cross 10,000 runs in Test cricket.

Gavaskar pointed out the Indian team has to work really hard to become unbeatable on overseas tours as well but whenever a pitch offers something extra, batsman have always struggled.

“Whenever the pitch has something extra (for bowlers), batsmen struggle. Since 1877 when international cricket began, this has been the case. Series defeat in New Zealand proved again how difficult is it for India to win abroad. Likewise, India are unbeatable at home. A lot needs to be done by India to replicate home success on foreign soil,” he said. 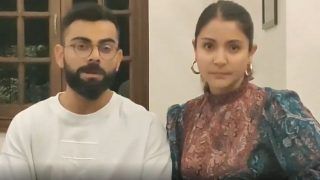 We Are Staying Home, You Should do it Too: Virat Kohli And Anushka Sharma on Tackling COVID-19 Pandemic

‘Think of Your House as a Condom And Covid19 as STD’: Mitchell McClenaghan