Stokes and England teammate Alex Hales were involved in a fight outside a club in September 2017.

England allrounder Ben Stokes has opened up on how his life has changed following an incident outside a Bristol club in 2017 resulting that resulted in a suspension and disciplinary proceedings.

Stokes and his England teammate Alex Hales were involved in a fight outside a club in September 2017 following their win over West Indies in an ODI. Footage of the brawl created controversy resulting in England and Wales Cricket Board (ECB) suspending Stokes.

He also missed the Ashes tour of Australia in 2018.

“Thinking all this is going to be taken away from me might be the thing that has changed the way I do things,” Stokes told ESPNcricinfo. “I was that close to my career ending and being thrown away just like that. Maybe that is it.”

He added, “It sounds silly but, could Bristol have been the best thing that could have happened to me? Who knows. But maybe in terms of my way of thinking.”

The 27-year-old says he has stopped going out except for dinner, preferring to celebrate with his England teammates in the team hotel. “I don’t go out anymore. I mean, I might go out for dinner, but I don’t go out-out [for a big night] anymore in England. I used to love going out and celebrating with the lads. But we can do that in the hotel and I don’t miss it. I don’t feel that urge any more. Once you make the transition to not doing it then you don’t miss it.

“It’s pointless. You get recognised and then, after someone has had a few ego boosters, a few vodka and whatevers, they feel they can come up to you and say whatever they feel. There are people ready to target you everywhere you go. I prefer staying in and chatting nonsense with my team-mates.”

Stokes ordeal ended in December last year when an ECB Disciplinary committee fined him and Hales over the incident, issuing backdated bans after finding them guilty of bringing the game into disrepute. 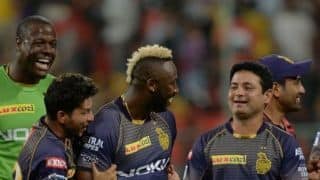