Panaji: In an anti-climax, the panel headed by Dr Shekhar Salkar has withdrawn from what was supposed to be a bitterly-fought election of the Goa Cricket Association (GCA).

After the controversy surrounding the election reached the Goa bench of Bombay High Court, it allowed election with the condition that results should not be announced until further orders.

The court, which appointed ‘election committee’ headed by Justice AP Lawande to oversee the process, also pulled up the Salkar-led group for resorting to unfair means. India Women looking to perform well rather than look at results

“Some of the clubs realised that there was no point in fighting election. That is why the peace was brokered between the two factions,” said Faldesai, denying that the state government intervened in the matter. India tour of Zimbabwe 2015 definitely on: BCCI

“Being a politician I shouldn’t interfere. But I am here as a member of GCA,” he said.

Salkar said both the factions will withdraw the police cases filed against each other in the run-up to the election. Following withdrawal, the election committee cancelled tomorrow’s polls. Lalit Modi alleges involvement of two Indian and one West Indian player in IPL 2013 Spot-Fixing

“All the ordinary and life members have been informed that election to the posts of president, life member and members stands cancelled in view of withdrawal of nominations by the contesting candidates,” it said. 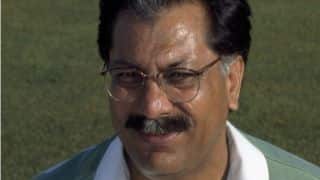 Zaheer Abbas hailed by WICB for being appointed as ICC President