With a lead of 10 runs from the first innings, Red have scored 172 in their second innings for the loss of just one wicket.

After the first day of Duleep trophy saw 17 wickets falling down, it looked like a formality to get the 3 wickets of India Green on day two. India Red riding on Nathu Singh’s 6-for packed Green’s innings at 151 which meant Red still had a lead of 10 runs. India Red when came in to bat for their second innings, Red lost their first wicket very quickly in the form of Srikar Bharat. Bharat made 20 of as many balls but could not sustain much against Ankit Rajpoot as the bowler got some movement of the pitch which did the job for me. . ALSO READ – India Red vs India Green, Duleep Trophy Live Updates of first pink cricket ball competition in India

It seemed like Red would were heading the same way as they did in first innings. But Sudip Chatterjee and opener Abhinav Mukund stabalised the innings. Both these batsmen started off on a very cautious note as they looked to defend good deliveries and hit bad balls. These 2 batsmen took their time to settle down on the pitch and started looking very comfortable against bowlers as the time passed by.

Soon these two started hitting ball all over the ground. They took to aggressive mode and now have put their team in a very dominating position at the stroke of Tea. Green bowlers have looked completely clueless as these two attacked them. The fielding too has been shabby for Green as they dropped some easy catches of which Chatterjee’s catch at slip was dropped by Suresh Raina. the Green skipper seemed like getting afraid of the ball as he turned away from the ball which came his way.

Mukund and Chatterjee have made a partnership of 133* which seems like a game changer for Red. Mukund is 85* and Chatterjee is on 65*. Red have lot of batting to come as they still have 9 wickets left in hand. Green need to rethink their strategy as things have not at all gone by their way. 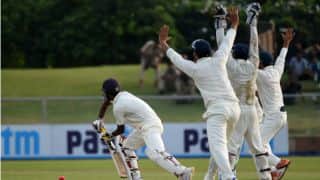 Duleep Trophy 2016: Bowlers day out on Day 1 between India Red and India Green