South Zone experienced a lower order collapse after the dismissals of Rahul and Vihari.

Central Zone reached 68 for no loss at the end of 12 overs at lunch on Day Three of the Duleep Trophy final, being played at the Feroz Shah Kotla. Faiz Fazal and Jalaj Saxena are batting on scores of 28 and 37 respectively. Central trail by 35 runs, after having dismissed South Zone for a total of 379, with Ali Murtaza emerging the pick of the bowlers with figures of four for 59.

The day began with South Zone resuming from their imposing overnight score of 308 for four, with Lokesh Rahul and Hanuman Vihari batting on scores of 168 and 38 respectively. The duo began on a smooth note, getting the boundaries at regular intervals during the overs of Pankaj Singh and Ishwar Pandey. Vihari was especially ruthless on the bowlers, sending the ball over the ropes regularly, bringing up his half-century in no time.

Central skipper Piyush Chawla decided to get himself on along with left-arm spinner Ali Murtaza into the attack with the hope of breaking the partnership, which was looking threatening at that point of time, and preventing the South batsmen from getting away with the match. And the duo managed to do exactly that, getting rid of the pair shortly thereafter. From a score of 359 for four, the two would go on to send the rest of the batting order back to the pavilion turn by turn.

It was the beginning of a spectacular collapse, that saw the rest of the batting order fall like a pack of cards. Murtaza went on to pick four wicket for 59 runs, his third best performance in First Class cricket. Chawla dismissed HS Sharath to bring the curtains down on the South Zone innings.

Central Zone began their innings on a much more confident note, with Jalaj Saxena going for the kill from the third over itself. Saxena, along with Faiz Fazal, were scoring at a rate of five runs per over, dispatching the ball all over the boundary from time to time to keep the scoring rate as such. Central were 68 for no loss at the end of the session, having faced 12 overs. They now need another 35 runs to draw level with South Zone, and are well on their way to setting a challenging target, if they manage to get their partnerships right. 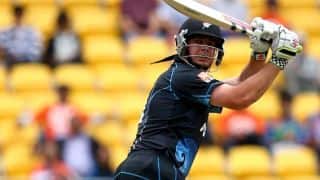