Robin Bist and Mahesh Rawat were unbeaten on scores of 26 and 11 respectively.

Central Zone finished at a score of 214 for the loss of four wickets at the end of play on Day Three during the ongoing Duleep Trophy final match against South Zone at the Ferozshah Kotla in Delhi. Robin Bist and Mahesh Rawat were unbeaten on scores of 26 and 11 respectively when the umpires took the bails off to call for stumps. Shreyas Gopal took two wickets for South Zone, conceding 43 runs in the process, while Pragyan Ojha and skipper R Vinay Kumar took the other wickets, giving away 52 and 56 runs respectively.

The day began with South Zone resuming from their imposing overnight score of 308 for four, with Lokesh Rahul and Hanuman Vihari batting on scores of 168 and 38 respectively. The duo began on a smooth note, getting the boundaries in regular intervals during the overs of Pankaj Singh and Ishwar Pandey. Vihari was especially ruthless on the bowlers, sending the ball across and over the ropes regularly, bringing up his half-century in no time. Piyush Chawla decided to get himself on along with left-arm spinner Ali Murtaza into the attack with the hope of breaking the partnership, which was looking threatening at that point of time, and preventing the South batsmen from getting away with the match. And the duo managed to do exactly that, getting rid of the pair shortly thereafter.

It was the beginning of a spectacular collapse, that saw the rest of the batting order fall like a pack of cards. Murtaza went on to pick four wicket for 59 runs, his third best performance in First Class cricket. Chawla dismissed HS Sharath to bring the curtains down on the South Zone innings.

Central Zone began their innings on a much more confident note, with Jalaj Saxena going for the kill from the third over itself. Saxena, along with Faiz Fazal, were scoring at a rate of five runs per over, dispatching the ball all over the boundary from time to time to keep the scoring rate as such. Central were 68 for no loss at the end of the session, having faced 12 overs. Things were going very smoothly for Central at one point, when both batsmen brought  up their respective half-centuries, and the 100-run opening stand was brought up as well. The run-flow was corked by Ojha during the 38th over, when Saxena, who was dismissed for a score of two from 43 balls, was trapped leg-before.

Saxena’s dismissal was followed by that of Fazal, who departed off the bowling of Vinay after the latter served him a short-0f-length delivery, which Fazal tried to viciously pull towards the deep square-leg region, but only managed to get a top edge and get caught at the same region. Fazal was furious with himself for the way he threw his wicket away, as he was enticed to play the shot by Vinay, who got hit for a boundary off a similar delivery in the ball before the wicket.

Top-scorer from the previous innings, Robin Bist, was teamed up with Naman Ojha, and both were new to the crease and had an enormous responsibility on their hands after the departure of two set batsmen. Naman however, edged a Shreyas Gopal delivery. which was caught at the slips by Robin Uthappa. The fourth wicket to fall was that of Ashok Menaria, as he was trapped leg-before.

Central are still in a position of control at the moment, and the two batsmen present at the crease tomorrow need to ensure that they keep the momentum of the run-flow going. On the other hand, South will hope to get some early strikes tomorrow morning, to trigger a collapse that they witnessed in their own innings. 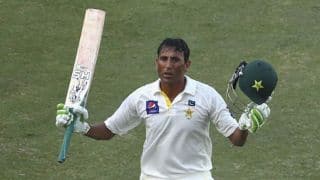