Pankaj Singh is caught at cover off the bowling of Gopal; South Zone set a target of 301.

Central Zone were dismissed for 403 runs after 105.5 overs, with Robin Bist remaining unbeaten on 112 from 174 balls. South Zone have been set a target of 301 runs, with one-and-a-half days remaining in the course of play in the Duleep Trophy final being played at the Feroz Shah Kotla ground at Delhi.

Central skipper Piyush Chawla will be happy for the fact that his side managed to move past the 400-run mark, which seemed unlikely at one point when Pragyan Ojha and Baba Aparajith struck in consecutive overs to reduce them to 260 for seven. The rescue act was carried out by Bist and no. eight batsman Ali Murtaza, who had earlier taken four wickets for 59 runs to cause a lower-order collapse during South’s first innings. The two then added a 104 runs for the eighth wicket, with both Murtaza bringing up a fine half-century, his second First-Class fifty.

Murtaza was the dismissed the very next delivery by Abhimanyu Mithun, who was then reintroduced into the attack, after he nicked the delivery into the keeper’s gloves. Ishwar Pandey played a cameo innings, where he hit a couple of fours and sixes, before getting his leg-stump uprooted by a peach of a delivery by Shreyas Gopal. Pankaj Singh was the last batsman to walk in, and smashed the first ball that he faced for a six over long on. Pankaj was dismissed off the next ball however, as he attempted another big hit, but top-edged the ball towards cover, where Aparajith held on firmly. Gopal ended with figures of four for 60, the best among the Southern bowlers.

Central Zone resumed on the fourth day from their overnight score of 214 for four, with Bist and Mahesh Rawat walking to the crease. Mahesh Rawat faced the first over of the day bowled by skipper R Vinay Kumar, sending the fourth delivery for a boundary towards the square leg boundary. The second over was a wicket-maiden bowled by Pragyan Ojha, who did the damage in the 66th over when he removed Mahesh Rawat for 16.

Robin Bist and Mahesh Rawat were unbeaten on scores of 26 and 11 respectively when the umpires took the bails off to call for stumps on Day Three. Shreyas Gopal took two wickets for South Zone, conceding 43 runs in the process, while Pragyan Ojha and skipper Vinay Kumar took the other wickets, giving away 52 and 56 runs respectively. 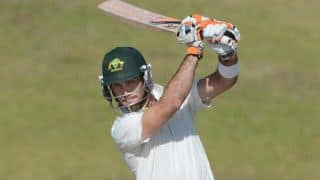