Although the opening tournament of the Indian domestic season, Duleep Trophy 2017-18, is already underway, there is still certain confusion.

Duleep Trophy, the opening tournament of the 2017-18 Indian domestic season, is already underway. However, confusion cropped up even before the first ball of the tournament was bowled on Thursday. The Board of Control for Cricket in India (BCCI) had earlier decided that the tournament would not be possible since India already have a busy international schedule. It only took place only after the Committee of Administrators (CoA) asked BCCI to reinstate the tournament. The tournament, perhaps hastily arranged, got underway from September 7. However, the squads and the unavailability of players cast confusion before the tournament. Live Cricket Updates, Duleep Trophy 2017-18, India Red vs India Green at Lucknow

Chief selector MSK Prasad had a tough time in selecting the 45 players for the three playing sides. It was also reported that some players had withdrawn from the tournament citing a number of reasons. These include county commitments and lack of match fitness. Prasad refused to reveal the names of the unavailable cricketers, while KVP Rao was unavailable for comment as well, as reported by Cricbuzz. BCCI did not release any official statement on the issue either, leading to further confusion.

To add to the woes, Ekana International Cricket Stadium in Lucknow, the venue, is still under construction and does not have adequate facilities yet. 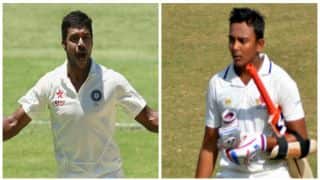