At the end of opening day's play of the third Duleep trophy 2017 match, India Green trail India Blue by 77 runs.

At the end of opening day’s play of the third Duleep trophy 2017 match, India Green trail India Blue by 77 runs. On Tuesday at the Green Park Stadium in Kanpur, India Blue won the toss and elected to bat. They were bundled for 177 by the Green bowlers within the first two sessions. Later, Green put up 100 runs on the board, losing their top three batsmen. Manprit Juneja remained unbeaten on 6 before stumps, and either of Dhawal Kulkarni, Parvez Rasool or Amandeep Khare is likely to join him on Wednesday to take things forward. READ: Raina, Tiwary revive India Blue at tea, Day 1 against India Green

Aniket Choudhary’s early strikes triggered a batting collapse of the India Blue lineup from which they never revived. India Blue lost both their openers within the first six overs of the match, and were reduced to 16 for 2. Skipper Suresh Raina joined Manoj Tiwary to form their innings’ first and only strong partnership which helped them score 92 runs in the session despite losing 2 wickets. Things seemed fine as the teams went for tea.

The India Green bowlers struck again in the second session. After Raina went back for 40, Tiwary barely found any support from the other end. He scored 78 runs, fighting a lone battle and showing his experience and potential. The team crumbled within 6 overs of Tiwary’s departure, putting up a low score of 177. India Blue lost 8 wickets in the second session, scoring only 85 runs. Parvez Rasool ran through the middle-order, picking up 5 for 70. Choudhary finished with 3 crucial wickets.

Nitin Saini and Kaishik Gandhi took the team off to a decent start, putting up over 50 runs on the board. Ishant Sharma gave India Blue their first breakthrough, removing Saini for 25. The team got rid of two more of their opponents’ batsmen, but the strikes were not as prompt as India Green. This let the batsmen with time to score few yet useful runs. The session remained more or less fruitful for India Green, who put up 100 runs. 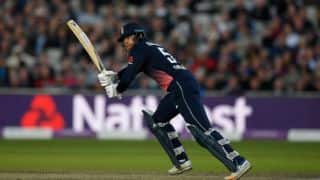