Bravo smashed a six and a four each to score 27 off 26 balls and was cleaned up by Turner in the 15th over of the game. Chennai were 82 for five after 15 overs in the 15th match of the ongoing T20 tournament.

It has been a tough ride for Chennai and they have to do something big in the next six overs. MS Dhoni is yet to come in the middle and he could come and change things for Chennai are they are clearly struggling. Click here for the live blog of the CLT20 2014 match between Perth Scorchers and the Chennai Super Kings 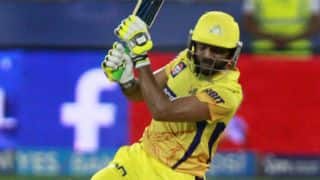