Dwayne Bravo says his players were caught "off guard" by the New Zealand batting assault.

West Indies’ captain Dwayne Bravo says his players were caught “off guard” by the New Zealand batting assault in the third One Day International (ODI) on Wednesday.

New Zealand steamrolled over the West Indies to win the one-sided encounter by 159 runs and level the five-match series one-game each, reports CMC.

The third ODI, was on the verge of being called off due to the weather, but the teams got in 21 overs each, with New Zealand powering to 283 for four while the visitors crawled to 124 for five.

“We wanted to bowl first, we won the toss, we did that, but I think the way New Zealand batters batted really caught us off guard.”

The New Zealand innings were highlighted by the fastest international century from Corey Anderson and the sixth-fastest ODI ton from Jesse Ryder.

“They took their chances and it came off, there was no stopping them. Jesse Ryder set the tone, Brendon McCullum, the cameo he played actually gave the other players the freedom to come in and be positive,” said Bravo.

“Players batting like that, in good form, good strikers of the ball, there’s not much you can really do as a team or as a captain, so you’ve got to give credit to them.”

The West Indian bowlers were punished with Sunil Narine and Ravi Rampaul bearing the brunt of Anderson’s carnage, conceding four sixes in an over each with Rampaul’s three overs costing 64 runs.

“It was tough for us, cold conditions, one-over spells, it is not easy for any bowling team to actually come on and be spot-on,” the skipper said.

“We have to regroup. We are not going to let this game dampen our spirit.”

Apart from a score of 29 from Narsingh Deonarine the only other batsmen (apart from Bravo) contributing double digit scores were Chadwick Walton with 17 and Lendl Simmons 17.

“I’m a bit disappointed about how we went about our batting as well, that’s one area I definitely think we need to improve on,” said Bravo who top scored for the West Indies with an unbeaten 56.

“Chasing 280 in 21 overs is always going to be difficult, but I think we could have (put on) a better batting display.” 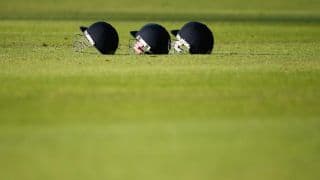 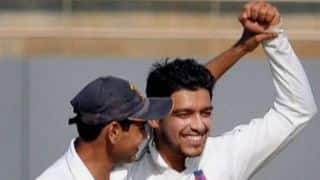