West Indies all-rounder Dwayne Bravo, who has been named as the team's captain for the ICC Champions Trophy said that he is learning a lot from his Chennai Super Kings skipper MS Dhoni. 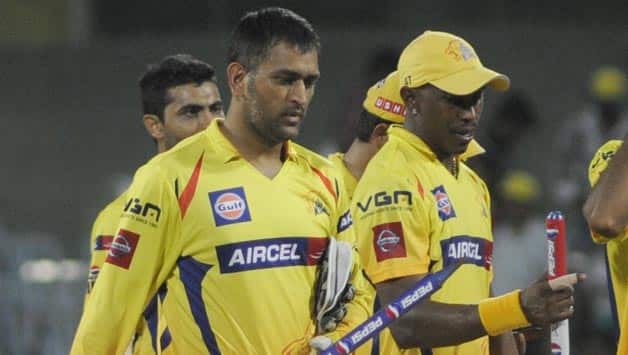 West Indies all-rounder Dwayne Bravo, who has been named as the team’s captain for the ICC Champions Trophy said that he is learning a lot from his Chennai Super Kings skipper MS Dhoni.

“The way you have MS carry himself on and off the field, I have learnt a lot for him. I spend a lot more time talking to him about cricket. Obviously, India will come up against the West Indies team [when they play Champions Trophy] in England. I am happy being led by him. I learn a lot from him and I am enjoying every moment of it,” Bravo told reporters on Monday.

“It’s a great feeling [to be the captain]. I am humbled by their decision. At the same time, I am very happy and looking forward to it. I am given the opportunity to lead a bunch of talented guys. The entire world loves the West Indian players.

The Trinidadian expressed confidence of finishing as the champions in the eight-team league to be held in England and Wales next month but said the teams in group B are quite strong.

“Winning won’t be easy. Winning is a process. Obviously we have a tough group with India, Pakistan and South Africa. But we will take one game at a time and try to finish as champions…Try to go to semis and take it from there,” he said.

“My favourite cricketer was, is and will always be Brian Charles Lara. Apart from him, I look upto Jacques Kallis, being an all-rounder myself and team mate Kieron Pollard. I look upto them. It is great to play with Pollard,” he said.

Bravo is the leading wicket taker in the ongoing IPL and asked about his ability to take wickets,”I think it boils down to the condition or the surface, the time of the game, the particular batsman, you need to know when is the right time to bowl a slower delivery or a yorker and try to read the situation of the game.”