Bryan Davis believes that it was the right decision but he is disappointed with it.

Port of Spain: Former Test batsman Bryan Davis lamented all-rounder Dwayne Bravo’s decision to quit Test cricket and said he should have been an integral part of the West Indies team over the years. The 31-year-old Bravo announced January 30 he was retiring from Tests but would continue to be available for One-Day Internationals and Twenty20.

“I can understand his frustration. He has been overlooked for so long. I would have had him in my team all the time and still believe he should have played a lot more Tests.”

Bravo’s decision to retire from the longest format came after nearly four years after he played his last game on the tour of Sri Lanka. He finished with 2,200 runs from 40 Tests at an average of 31, and also took 86 wickets at nearly 40 apiece. His decision also followed his sacking from the one-day team last December and his removal as captain after only just over a year in charge. Davis, who played four Tests against Australia in 1965, said Bravo should have had a longer career in the longest format.

“I am a firm believer that anybody can make their own decisions and he felt it was the right time. I am disappointed he did not play more Test cricket,” he added.  Davis has played four Tests for west Indies, scoring 245 runs at an average of over 30.

Rory McIlory rolls his arm over 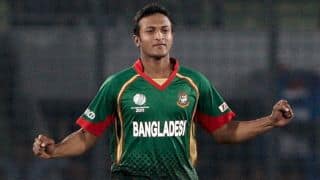