CSK will look to rebuild after this early loss.

Dwayne Smith is dismissed off the first ball of the innings for Chennai Super Kings (CSK) against Kolkata Knight Riders (KKR) in Indian Premier League (IPL) 2015 Match 30 at Kolkata. Smith was looking to drive the ball outside off and it went straight to Ryan Ten Doeschate at cover point. Smith is therefore dismissed for a duck off the very first ball and Pat Cummins gets the wicket. LIVE BLOG: KKR vs CSK

This is a huge setback for CSK as Smith and Brendon McCullum have often gotten them off to a great start. Suresh Raina is the new batsman and he will look to put on a good partnership with McCullum. LIVE SCORECARD: KKR vs CSK

Earlier KKR skipper Gautam Gambhir had won the toss and elected to bat first. KKR have not made any changes to their side. But CSK have made a couple of changes in their side. Injured R Ashwin has been replaced by Pawan Negi and Ronit More comes in place or fast bowler Ishwar Pandey. CSK had won the previous game against KKR by two runs. LIVE STREAMING: KKR vs CSK 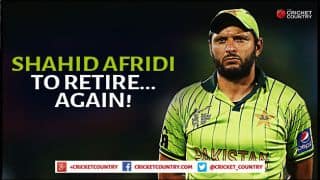