Chennai raced to 60 for no loss in just six overs.

Catches win matches is an old adage that has always proven to be true over the years. In a crunch tie, a knock-out tie like this, you don’t drop catches of a player of the caliber of Faf du Plessis. The ball went high in the air and a mix up between harbhajan singh and Ambati Rayudu ensued and a golden chance to strike an early blow was lost as it fell in no-man’s land.

The South African willow-wielder was in full flow and there was huge six over deep-mid wicket and then went for a the same pull shot that reached the boundary. Dwayne Smith was in full cry against the pace of youngster Jasprit Bumrah. smith eased to three  consecutive boundaries of the over and the

It was a wrong move from Rohit Sharma and it backfired straight away. Du Plessis came down the track to whack a boundary past mid-off and then the ball reached the deep-mid wicket fence with a ferocious pull shot. Then there was a loud leg-before appeal and it was turned down by the umpire. It was a good decision by Bruce Oxenford.

Earlier, Lendl Simmons continued his fine form in the Indian Premier League (IPL) 2014 and scored yet another fine half-century to propel Mumbai Indians to a competitive 173 for eight after Mahendra Singh Dhoni’s Chennai Super Kings  won the toss and elected to field first. Simmons had able support from Michael Hussey at the top of the order along with cameos from Corey Anderson and Rohit Sharma. 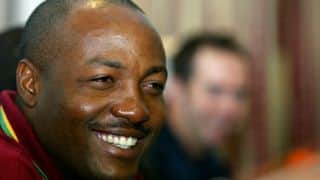