Chennai are 16 for no loss after three overs.

In the Indian Premier League (IPL) 2014 game No 33 played between Mumbai Indians and Chennai Super Kings, Chennai started their chase well. Dwayne Smith known for being naturally aggressive played some fine shots on the up. He looked in fine fettle, while facing pacers  from the opposition ranks. After the end of the first over bowled by Parveen Kumar itself, they were 12 for the loss of no wickets. P Kumar though came back well by bowling a fine second over.

Earlier, Mumbai, despite losing a single wicket during the first 10 overs of the innings stuttered a bit. Chennai’s spinners, Ravindra Jadeja and Ravichandran Ashwin bowled tight overs to keep the opposition ranks on tenterhooks. Even the seamers in their line-up bowled with good control. Among the seamers, Mohit Sharma was the best bowler on view. It eventually led to the dismissal of the opener, Lendl Simmons, who was caught by Faf du Plessis on the boundary line off the bowling of Ashwin for a well-measured innings of 38. It finally meant that Mumbai could get 157 for the loss of six wickets in their allotted 20 overs  and that too on their home turf. 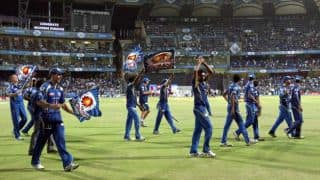